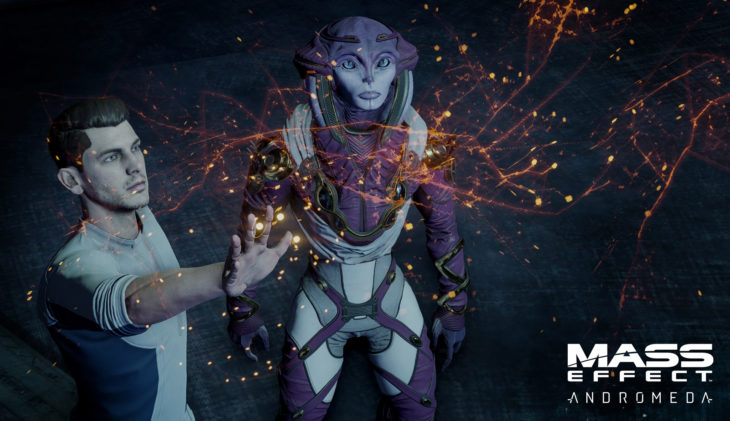 Traversing through space, solving the mysteries of the universe, encountering alien species and excellent cover and shoot gameplay are prominent features that make up the Mass Effect DNA. The fourth and latest installment of Bioware’s star franchise, Mass Effect Andromeda, hits a few bumps along the way but ultimately rewards players with a familiar, but new and exciting Mass Effect experience.

Jumping into the young role of a Ryder sibling – either brother or sister – you take to the stars by leaping 600 years into a new galaxy. After a cryogenic sleep for the entire duration of the multiple century long trip, anonymous dark matter webs across the new Heleus Cluster in the Andromeda galaxy, causing heavy destruction to the Arks – cargo ships full of cryogenically frozen Milky Way species given the chance to populate the new territory.

Complications arise and the title of Pathfinder becomes your new identity. As the Pathfinder, your mission is to do exactly that, find and navigate across uncharted territories new viable planets to settle and create a new “home” for the Milky Way races. With the help of familiar species from the earlier games, like the Asari, Krogans and Turians, a couple new species are introduced, such as the mighty and powerful Angara, as well as the deadly and villainous, Kett.

The Kett are the main antagonist throughout the game, but also robotic tech known as Remnant stands in your way as well. Using upgraded cover based action and fluid battle mechanics, Andromeda performs better than any game in the series. Familiar weapon enhancements give an extra boost to damage and gameplay tactics, as well as plenty of biotic, tech and combat powers to build the ultimate soldier.

The new ship, The Tempest, is a sleek machine with plenty of room and crew members to extend the hours of playtime in Andromeda. Cutting out the load times and elevator ride from the initial trilogy, running about the Tempest is fluid and easy to navigate and find your crew members and quest lines. Various upgrades are found at a terminal on the new ship which provide Ryder with the technology to research and develop new weapons, enhance your battle abilities and combat vehicle – the Nomad, as well as send recruits out to gather valuable resources and experience while you’re off completing important missions.

With a large heap of the animation glitches and gameplay errors now patched, Mass Effect Andromeda earns a solid playthrough to win longtime fans back. After the staggering amount of negative reviews upon its release, the game looks and plays a lot closer to what gamers were expecting from the triple A series. With a ton of main missions, side quests, tasks and other miscellaneous adventures and a massive galaxy full of large planets to explore, strap in and prepare for a long flight through new territories and begin an epic new journey worthy of any action RPG fan’s attention.