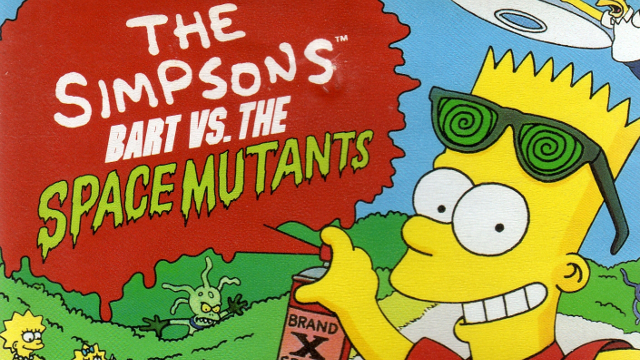 The reigning gods of modern animated television from the early 90s, The Simpsons have created outlandish laughter for millions of households everywhere. It’s no wonder shortly after the premiere of the hit prime time television show came video game adaptions, one after another, one which may have flown under the radar compared to others, Bart vs. The Space Mutants.

A true platformer at the core, you’ll take control of the mischievous start, Bart Simpson, in hopes to rid Springfield of mind altering space mutants. Equipped with items like cherry bombs, rockets and cans of spray paint, you’ll navigate your way through town re-painting all purple objects, smashing exit signs, balloons and hats to rid the town of these seemingly harmless objects. The color purple and all of the other aforementioned items are dangerous ingredients for the mutants, as it allows them to construct their ultimate weapon capable of destroying the world.

Spraying and destroying objects are one thing, but getting to them is where the trickery comes into play. In traditional platforming fashion, you’ll be required to jump, dodge and skate your way to various locations where the objects hide. Jumping across window sills and awnings, skating past little red mutants while refilling you spray can and weapon supply prove as difficult as any puzzle platformer to date.

Also in Bart’s arsenal is a pair of X-ray glasses. Not used for the purposes the television show might imply, you’ll throw these bad boys on when “civilians” pass by, in turn revealing the true identities of any corrupted space mutants scavenging Springfield. Not all pedestrians walking by pose a threat, so jumping atop the head of an innocent will cost you a life, so making quick use of the X-ray vision is an important tactic for success. Through each of the five levels of the game, family members become available to help Bart in his alien mission to save their beloved town of Springfield.

As the first installment of The Simpson’s adapted video games, Bart vs. The Space Mutants takes you on a tough, tactical and patient platforming adventure to save the small town of Springfield from a gang of over-powering alien race. Many more Simpson’s games followed afterward, but Acclaim laid the groundwork here for the excellent titles to stand up against the test of time.