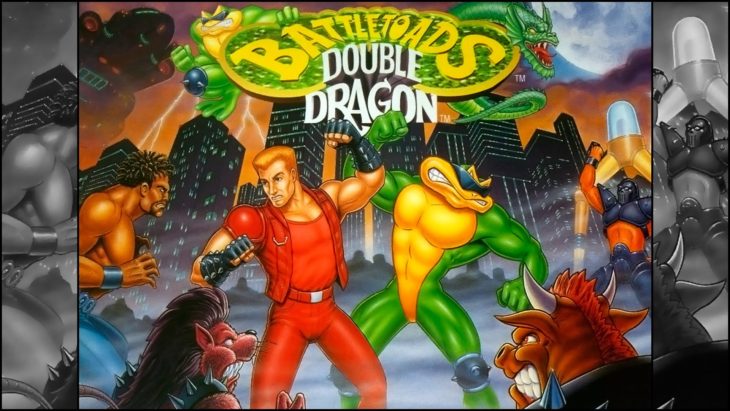 This classic beat em’ up title released in 1993 further increased and polished the side-view adventure brawlers. Combining two iconic gaming franchises into one jam-packed hit, Battletoads & Double Dragon was a must have for any old school gaming collection.

At the start of the game the player has five characters to choose from, Double Dragon characters Billy and Jimmy Lee, and the three Teenage Mutant Ninja Turtle-rivaled Battletoads, Rash, Pimple and Zit. Stopping the threat of the Battletoads villain, the Dark Queen, the toads (and their mentor, Professor T Bird) contact the help of the martial arts brothers from Double Dragon.

The game takes you through a handful of levels, each becoming increasingly tougher as the story unfolds. With a solid strike button and the useful jump, you’ll navigate your way through waves of unique enemies and various platforming obstacles, like climbing fences, zipping through levels on hover bikes, rappelling down walls or climbing on to automated gun turrets. Impressive level design for its era and catchy tunes set the theme for each area, each one featuring new baddies to wallop in oblivion.

Along with the varying enemies, there’s a team of bosses backing up the evil Dark Queen. At the end of each level popular character’s from the Shadow Warriors of the Double Dragon franchise will put your combat tactics to the test. Each level has its own theme of enemies and obstacles with a new powerful foe waiting as the finale.

The 16 bit era gave us tons of great beat em’ ups to pummel our way through to the invigorating conclusion. When developers create a crossover title, mixing gaming worlds into one is an exciting feature and a sure way to please a broader audience of fans. Battletoads & Double Dragon wasn’t the first, and it may not have been the best, but it allowed the idea of crossover games to expand and adapt in the creative realm of video games.