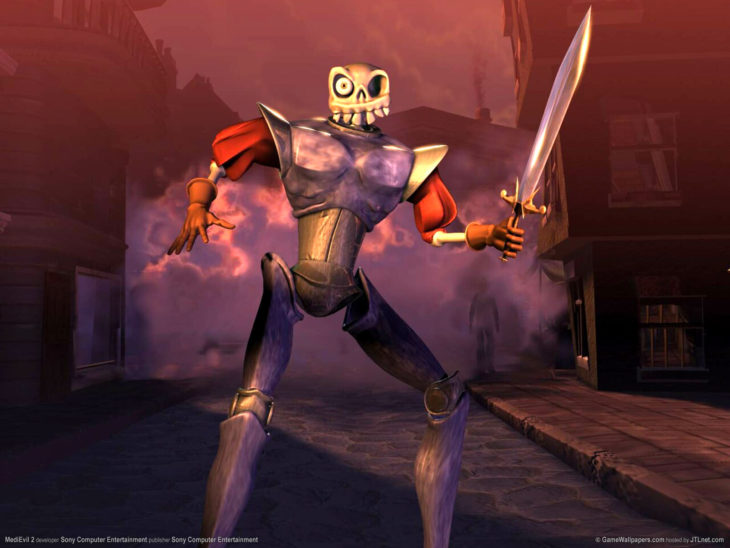 The original Playstation Entertainment System established a devout fanbase by pushing out a library of titles that planted a stake in the ground for many of the popular games we play today. The 1998 hit true action/adventure title, MediEvil gave gamers a journey through the enchanted lands of Gallowmere in a wonderful 3D world.

Taking control of the under-achieving hero, Sir Daniel Fortesque, you’ll make your way through the darkness that covers the gothic lands of Gallowmere. Lord Zarok has returned 100 years after his planned invasion on Gallowmere had flustered, while the townspeople lived on in the wake of the war. With Sir Fortesque’s life claimed in battle, – after being struck in the eye by the very first arrow fired – he has returned from the grave to finish what he’s started.

Traversing through graveyards, forests, mausoleums, pumpkin gorges, haunted ghost ships and many more entertaining, bizarre and puzzling levels, MediEvil brings a journey like no other of its time. Enemies littering the lands, infested with undead zombies, ant soldiers, violent scarecrows and pumpkin monsters, you’ll have a large assortment of mighty weapons discovered and rewarded throughout the adventure.

As you hack your way through each level, a ghostly chalice fills with the souls of the slain. With every kill you acquire the chalice fills, increasing the physical form the transparent golden cup. Once the chalice fills completely – indicated by a percentage number – the player is free to collect the cup full of souls; only of course after they’ve discovered its location hidden somewhere in each level. The collected chalice grants Sir Daniel Fortesque a trip to the Hall of Heroes in between each area.

The Hall of Heroes is the great hall dedicated to the warriors who (very briefly) fought alongside Sir Fortesque for Gallowmere. Here you are rewarded for every trip you are able to make to the Hall of Heroes, so the more chalices you collect, the more trips granting you better weapons and items throughout the length of the game. Battle weapons like hammers, clubs, arrows, spears as well as many other upgrades and items are offered by the restless statues of friends and acquaintances who fought by your side.

Throughout the adventures of Sir Daniel Fortesque, you’ll find yourself up against hordes of enemies, tricky puzzles and trivial bosses along the way. With the help of useful skills and weaponry, as well as a few snide talking gargoyles, MediEvil will transport you back to an era of groundbreaking graphics and immersion in what is now known as one of the most beloved classic titles of the original Playstation generation.