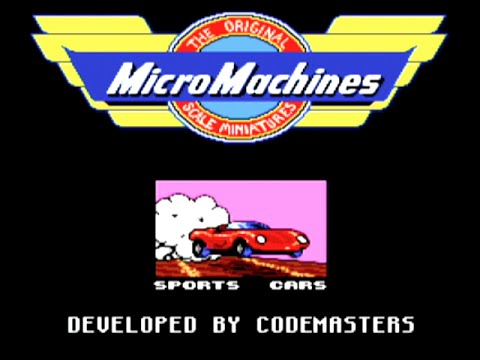 Racing games have continually featured popular speed machines, well-known courses and more and more realism in the modern era. Before the breathtaking graphics of our time took over the helm, there were a few titles that brought sheer joy and excitement to the competitive genre; one classic being, Micro Machines.

The vintage top-view toy car racer takes players on challenging courses through recognizable themes, such as workbenches, pool tables, sandboxes, bathtubs and the beloved breakfast table. Dodging everyday distinct objects found throughout each level like glue or oil spots, erasers, drops of juice, pool balls and paper binders used for ramps, you’ll find this micro racer is anything but easy. Maneuvering around in a variety of different vehicles, such as sports cars, powerboats, monster trucks and even helicopters, racing between and across these obstacles in the tiny toy cars proves quite tough as the racers continue to advance.

Taking control of a number of different styled mini toy vehicles, the player starts off by choosing either solo or two player modes, next followed by head-to-head or the tournament style competition, Challenge mode. The head-to-head mode pits you and one other player – either AI or couch co-op – against each other to see who can outrun the other first. Once the race has started, players then race around a course and gain enough distance between the two racers for a point. Once the total amount of points has been reached the race comes to an end.

For a more exciting and traditional option, Challenge Mode places you in the midst of a tournament style mode, taking you through all of the races the games has to offer. After choosing your character from a selection of eleven different characters, you then pick the first three rivals to compete against. Once a racer has placed last after a few races they will be eliminated and replaced by another available racer. Ranging from the backyard to the bathtub, different courses are featured throughout the variety of themes and locations.