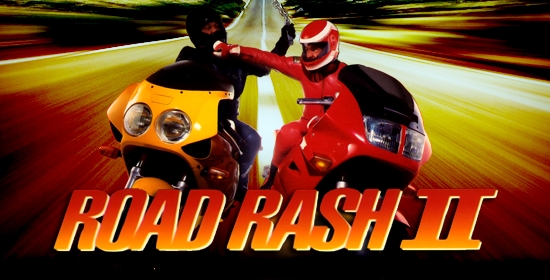 Old classic racing games came in all different forms and styles, giving players a variety of racing genres early on in gaming history. From Excite Bike to Formula One to Micro Machines, old consoles hit it hard with entertaining racers. The Road Rash series stood out however, combined high adrenaline racing with force and combat in, the highly acclaimed sequel delivered more high-speed brawls in, Road Rash II.

Choosing to race on up to five different courses stretched across the United States, you will face 15 other racers, each literally fighting their way to be number one. Throwing fists, jabbing kicks, swinging a billy club or chain, Road Rash II provided gamers with a different taste on the racing scene as an excellent sequel. Finishing in first is one thing, but surviving the race altogether proved a rather difficult, especially later in the game.

Starting off in the back of the pack and with no weapon in hand, you’ll dodge and weave from cars, barricades and other obstacles to climb deep into the ranks. Along with scraping passed other racers, catching air off of everyday objects (or animals) and competing with the gang of misfit cycle racers, you’ll be dodging and stealing useful weaponry from opposing rivals.

Using a solid jab to take portions of health down from other racers, once you’ve drained their health bar completely (usually about 3 or 4 hits), the racer then wrecks their bike, giving you, and the other racers, a leg up on the competition. Weapons like batons and chains deal heavier amounts of damage, but have to be obtained by AI racers who are equipped with a weapon. As they swing whatever may be hurling in your direction, you simply press the “jab” button and swipe the weapon from them, giving you a major advantage in the race.

Regions from all over the United States are featured throughout the game, from Hawaii to Alaska, down south to Tennessee and up north to Vermont, or all the way out in the vast deserts of Arizona, the climate change offers diverse scenery and props across the game. As you win the first set of five races in those designated areas, the following set of opponents are replaced with more challenging racers, and so on. More and more bikes are also offered the further you progress and the more money you rake in, ranging from high-speed crotch rockets to light and agile sportsters.

From adrenaline fueled races through memorable locations, narrowly escaping your way to first brings as much excitement nowadays as it did in the 90s. Road Rash II is an excellent sequel to a unique and competitive racing series; one that, in my honest opinion, died off too soon.