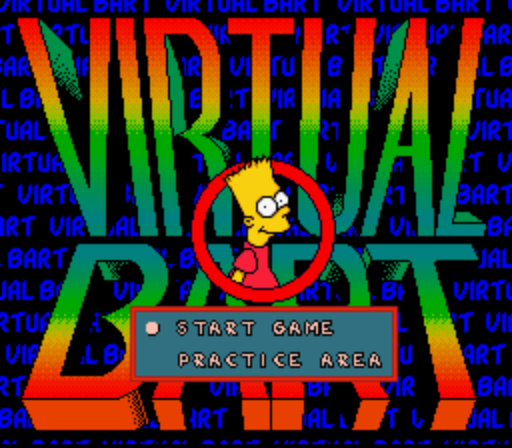 Throughout countless Simpson’s games, there are a few that hold themselves confidently above the rest. The mini-game loaded 94′ hit, Virtual Bart, is one of them and has tons of gameplay content to keep any active gamer happily (and humorously) entertained for hours.

Virtual Bart takes players across many different outlandish themes in the Simpson’s universe. From chucking tomatoes, racing motorcycles in nuclear Springfield or roaming the prehistoric days as a bart-dino, this title took addictive gameplay with unique settings and mechanics. Strap into the virtual reality machine and prepare to wreak havoc amongst the infamously familiar characters from the mega-hit 90s TV classic.

The game starts off in the “campaign” with Bart testing a virtual reality experiment located at the school’s science fair. A random selection of the game’s different levels occurs, placing mischievous teen into one of the many different Simpson timelines found throughout the game. Racing a motorcycle in a barren nuclear wasteland, making your way out of a dangerous water slide unscathed, hurling tomatoes and eggs at your classmates on “school picture day” are only a few of the mini games offered in Virtual Bart.

One game found in the game requires Bart to effortlessly toss tomatoes at your classmates while they walk back and forth at various speeds. Timing is crucial as you line up your target while taking into consideration of the length of how long the tomato will take to reach your classmate. Teachers and other adults periodically make and appearance, acting as a “strike” , so to speak, ending your run automatically.

Other games with entertaining gameplay features keep the title interesting, like a pig platformer – taking a bart-looking pig on a journey to escape a meat processing plant, an enormous maze-like water slide leading you to traps, health items and eventually the way out, and a baby tree-climbing platformer where an infant Bart Simpson climbs his way out of the confines of home, leaping and swinging from tree branch to tree branch.

Throughout the levels, standard gaming rules apply to most of the mini games. The platforming areas give you three lives and a health bar, once your life is depleted it’s game over. The motorcycle racer game sticks Bart in the wastes of Springfield, fighting against well-known rivals of the turbulent troublemaker, while dodging rocks, helpless squirrels and oncoming traffic. Once the time limit has drained or your health has been exhausted, your bike stalls and it’s back to the virtual reality wheel.

If not partial to the random selection of levels, the practice mode exists so you may pick and choose the gameplay of your choice. This mode helps hone your skills, or easily choose whichever game area you’re in the mood for.

Virtual Bart takes a cauldron of charming themes and playstyles, groups them all into one title and inserts the hilarious characters and quirks from a show that started a new era in television comedy. Yet another timeless classic introduced on retro gaming systems.