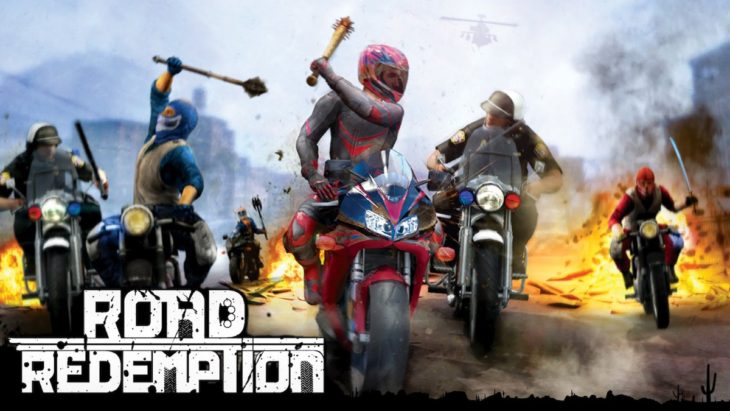 The concept behind Road Redemption from Pixel Dash Studios and EQ Games is an obvious shout-out to the classic racing brawler, Road Rash. Rocketing down long stretches of road while smashing through opponent racers with various weapons is a thrilling experience for anyone who grew up with the classic gameplay which debuted on the Sega Genesis/Master System so many years ago. However, sometimes our vivid imagination and yearning nostalgia blurs the lines of reality for what we expect from specific gameplay. Fortunately for Road Redemption, there’s still a little fuel left in the tank for something moderately exciting.

Check out our video review of Road Redemption below:

Road Redemption brings the classic formula from the coveted Road Rash series and adds a touch of new spice to the end product. Players will still race against rival racers, along with the ability to mercilessly heave melee weapons at opponents to knock them off course, and their motorcycles. However, various different genre elements like roguelites and RPG-esque mechanics helps deliver a more rewarding, but often more frustrating experience to dice up the gameplay.

The game’s campaign made mode is the Career path which acts like a one life roguelite motorcycle racer. Players will have one life to make it through as many courses as possible, with various health and boost rewards handed out for achieving particular gameplay milestones. The story behind Road Redemption is completely forgettable and seems obviously neglected from the developers as it essentially pits the player – a member of the Jackal biker gang – against a variety of other rival gang members, solo racers with no gang affiliation, heavy pedestrian traffic, and, of course, the law.

The story is short and simple yet lacks any real depth. In a game where players are primarily looking to race and battle their opponents in a non-stop thrill ride to the finish, the story doesn’t exactly need to be good. Setting up a premise as to why this flurry of angry bikers are all fighting over the road should suffice enough, and that’s how Road Redemption approaches its plot line.

After an assassination of a notorious biker gang leader, the group issues a massive bounty on the assassin which then sparks all other motorcyclists to track down the murderer. It’s a literal fight to the finish as the player will race through three different biker gang territories as they take on various objectives one after another. The game takes a few roguelite mechanics and adds them to the formula, such as track layout randomization, temporary perks and permadeath. However, there are a few other elements from other genres that allow players some sort of satisfying character progression after their biker’s body ends on the pavement.

After every completed race or objective players will have the option of spending hard-earned reward money on temporary perks, such as replenishing your health or nitrous gauge, upgrading weapons and other perks like bonus experience points or cash reward. These temporary perks only last as long as the player’s run through the campaign, resetting back to none at the start of each campaign attempt. However, after the player is down and out, they will then have the option of turning in acquired experience points for permanent perks which is an effective method of continuously pushing the player into further progression with every campaign attempt.

Some perks permanently increase personal player attributes like attack damage and increased overall health, while others are more content related like new bikers and motorcycles to choose from. Later in the skill tree offers up chances for the option to start at later levels in the campaign, which can help alleviate some of the tedious nature that can make itself present early on in the game. The permanent perk system isn’t necessarily filled with tons of ‘must-have’ features, but does help offer some sort of progress towards the game, and gives players the confidence in pushing to make it to the end of the game.

Players must keep a close eye on their health gauge and nitro tank as those two features help players make their way further into the campaign path. Players may add more health to their meter and pick up nitrous by successfully clobbering other racers, as well as a few other bonuses handed out after every completed objective. There’s always tons of other racers to wallop with your assorted collection of weapons, so taking advantage of taking out as many as possible can do wonders when driving yourself further into the campaign.

It Feels Good To Brawl

And to keep the fight going consistently throughout each race, players are equipped with four different weapon slots, each slot pertaining to the different weapon type. Two slots take up a light melee and heavy melee option with the third slot used for ranged attacks such as automatic rifles and shotguns. And finally the fourth slot is used for explosives, which can come in handy when going up against the game’s truck driving opponents as weapons like C4’s can be attached to vehicles, and grenades dropped behind the racer – taking out everyone in their wake.

The brawling system works incredibly well within the game standing as one of the major positives to take away from Road Redemption. Melee weapons are handled by the player pressing one button which attacks on the left side of the racer, and a second button attacking the right. Players can also utilize the classic kick option which acts more as an aggressive bumper tactic rather than dealing significant damage. And finally, Road Redemption features a handy parry execution which can be crucial in keeping players alive throughout their campaign run, as players can be attacked relentlessly from both sides quite often.

While the brawling moto-combat is excellent in both its weighted and “chunky” feel, it tends to feel as though this race where gangs are pitted against each other often feels like everyone is just against you. Fighting through mobs of motorcycle gangs all battling each other doesn’t take long for the entire squad to mercilessly charge after you, the racer, alone. However, there are some instances where objectives will sprinkle in a few of your fellow gang members to fight alongside you, which does help turn the tables slightly in your favor.

Whether you’re racing to be in the top 3 at the finish line, set out to attack and lay out a certain number of rival gang members or just trying to stay alive in a race against both the clock and other riders, the high-speed racing sits right alongside the brutal combat for success. While players need to concentrate in parrying enemy attacks and landing a few heavy hits, it’s equally important to stay focused on dodging incoming traffic and other obstacles. Short cuts speed by and various jumps allow for some tricky out-maneuvering tactics, but overall the racing requires precise timing in order to stay upright.

Are These Rubber Bands Breakable?

What stands out during each race is the extremely loose “rubber-band” effect. While this is common practice in most arcade racers, Road Redemption’s effect makes things a bit more frustrating. The standard rubber-banding in other racers allows players and AI opponents that have fallen behind to catch up to the leaders in order to keep things exciting and eventful. What Road Redemption does is something that’s notably less fair, and by catering to the brawling mechanics, brandishes any acquired racing skill near useless.

Once a player catches up to the next racer ahead, the game promptly evens the two (or groups) motorcycles for an opportunity for a relentless brawl. Not only does this loose rubber-banding system give an illusion of fierce competition, but makes the different bike stats almost redundant, as no matter how fast your bike may be – you’ll always be faced with nearly every racer you pass. While the limited nitrous boost helps forcefully push the racers effortlessly passed the pack, once the nitrous is released, a flurry of racers come zooming back at your heels. I understand the game’s push to keep the fighting as present as possible with this interesting system, but it also feels like the racing aspect comes off as more of a secondary skill rather than organically coinciding with the fighting elements.

And as an attempt to personalize each campaign run, players may choose between different racers and motorcycles each with their own unique attributes. One racer may come equipped with less health, but offers a much higher experience rate. And when selecting bikes, the typical racing vehicle stats come into play, like speed, handling and acceleration. There’s a bunch of other bikers and motorcycles to unlock as you make your way through the campaign mode and perk chart, so there’s typically tons of drive and motivation to continue your tread through the game.

Road Redemption does a decent job of reviving that nostalgia to those Road Rashers who have been craving more motorcycle mayhem over the last two decades. While falling a bit short of fully realizing what could come of the dead, but not totally forgotten series, there’s still some solid foundation here for a potential series to build on.

Anyone who misses the harsh roads of motorcycle brawls, police stalking street races on two wheels, Road Redemption is easily the best option on current gen systems. The unique roguelite approach to the campaign, simple controls and satisfying combat system can easily leave you wondering where else the combat-cycle genre could go, but still slightly falls short at delivering a true Road Rash-esque experience. While the industry hasn’t seen a true successor to the motorcycle brawler in ages, Road Redemption will have to do, for now, anyway.