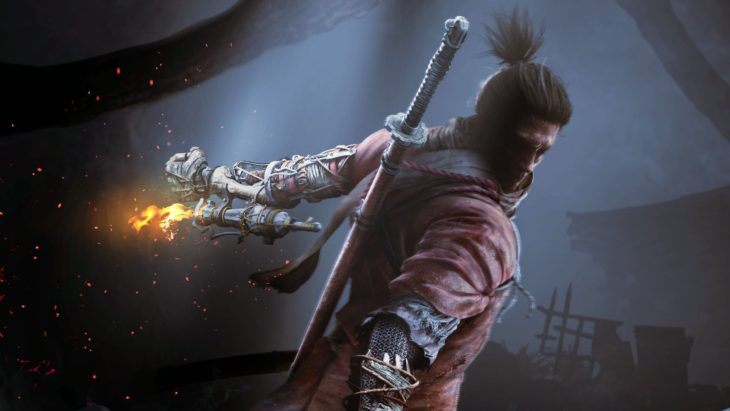 From Software has made quite the name for themselves over the previous decade with tough as nails gameplay, opaque worlds and deep character progression with acclaimed titles such as Dark Souls and Bloodborne. With their upcoming title, Sekiro: Shadows Die Twice, the iconic developers look to take the subgenre they’ve seemingly birthed known as ‘Souls-borne’ to exciting new levels, while simultaneously toning back some of the features that have been trademarks in their previous releases.

Not that these changes will greatly sway long-time From Soft fans from dodging Sekiro. The game looks to exude the same style of action and combat, a setting filled with dark creatures and, of course, towering boss fights to keep your heart rate pulsing at perilous speeds. What Sekiro is lacking from previous From Soft titles is substantially made up for with brand-new features that looks to take the somewhat dated formula into riveting new territory.

What Is Sekiro: Shadows Die Twice?

The new action-adventure title takes players through the Sengoku-era in Japan as a multi-faceted ninja. While the top layers of Sekiro appear to resemble the same mechanics and style of other From Soft titles in recent memory, there are some drastic changes made to the recipe. No longer will players choose their own class of character and create a build best suited to their playing style, as everyone will play as the skilled prosthetic arm wielding shinobi.

Perhaps the most apparent changes made to the game when compared to the Souls or Bloodborne titles is the disembarkment of any RPG structure, the option of stealth gameplay and the vertical direction when using the grappling hook. Also, while the combat appears to be in the same vein as previous Souls titles, there’s greater emphasis on swordplay since players must use the equipped katana. This provides different strategies to master, as well as requiring players to adapt to utilizing the sword since there’s wielding other primary weapons are no longer in the wheelhouse.

However, just because players are tied to the katana doesn’t mean there isn’t a flurry of prosthetic upgrades that can be implemented in combat situations. Finding new means of traversal, combat techniques and routes of making your way through each level are designed to keep the player engaged without the necessity of acquiring experience and building your character.

Another interesting feature added to the game is the strategy of death. Arising from the “Shadows Die Twice” tagline, players will periodically have the chance to resurface from death, placed tactically behind the enemy who had slain you moments before. This new approach of inventive gameplay won’t be available to the player at all times, so choosing wisely plays into the strategy.

Any fan of From Software titles over the past decade knows what to expect in terms of gameplay and, more specifically, combat mechanics. Movements are strategically placed between offensive and defensive maneuvers carefully balancing out your stamina output. In Sekiro, however, the emphasis on strict stamina usage has been negated and players are more focused on precise parrys to clash you and your enemy’s sword in hopes of creating a window of opportunity.

The combat has players utilizing a variety of features that play into whether or not you’ll be successful, or fall to your opponents sword. While the traditional approach in games focusing around combat mechanics similar to Sekiro seems apparent at first, players will soon learn to utilize precision and speed to clash swords and await an opening for a single kill strike. Since Sekiro is formed around a specific protagonist who wields a katana, players must master various techniques and adapt to the new twist on combat.

A few similar instances will carry over from previous From title, as players won’t always find themselves sparring one-on-one with other enemies. Hordes of weaker foes can still surround the player resulting in becoming overburdened and outnumbered, though, players now have the option grapple to safety, or stay out of sight altogether. And while the katana is the primary method of attack, the protagonist’s prosthetic arm houses an abundance of upgrades to discover.

Throughout the adventure players will upgrade their prosthetic arm through the game’s crafting and resources system. While the katana and even armor will never change throughout the adventure, unique customizations for your prosthetic arm, as well as a stout skill tree, will ensure a sense of character direction from one player to the next. The arm is similar to previous From games that included mana or magic systems. Players will collect spirit emblems from defeated enemies, a resource that allows the use of various prosthetic arm components.

What doesn’t play into spirit emblem consumption is the use of the grappling hook. From Software pulled this free-swinging ability from their work with the Tenchu series and implemented a new sense of freedom in the challenging subgenre they’ve created with the Souls series. Grappling around opponents is an option within the treacherous world created in Sekiro, sparking new ideas for tackling a multitude of enemies at once. But, don’t assume you’ll be able to bring these grappling tactics into hardened boss fights, as the developers have emphasized that each boss fight is built around traits of both the player as well as each particular boss.

What’s The Story In Sekiro?

The story that vaguely shed throughout the course of a From Soft game is continuous trademark for the studio in recent years. Short ramblings from a distant NPC, powerful and sharp rantings from a confident boss or the incoherent screams from an attacking enemy all tell the story throughout the trudge in the Souls-borne series. In Sekiro, the story may be bleak often, but comes equipped with a fully developed character, primary objectives and all.

Sekiro does a lot different from previous From Software work. While the core gameplay may seem like it’s still present with a beautifully dark setting, engaging combat mechanics and plenty of dangers to keep you plenty frustrated, there’s also tons of new additions to expand on the formula. Adding the heavy helping of vertical movement with the grappling hook is a huge push towards more freedom in the game world, as well as allowing players to think more creatively when navigating through every zone.

What’s more is that From Software is giving players yet another form of combat to master. The stamina management system became a staple in the studios series, so it’s a delight to see them branch away from that for something curiously different. Utilizing the many abilities from the prosthetic arm, such as flinging shurikens, stun-inducing firecrackers or a heavy-hitting axe seems like a welcome method of dancing away from the katana in crucial moments. In a game where players can’t build or customize their own personal characters, the skill tree promises to give players plenty of options for different approaches to gameplay.

Sekiro: Shadows Die Twice keeps looking better and better with every new detail revealed about the game. Can From Software continue their leadership in innovative gameplay with the formulatic changes coming in Sekiro? After a decade of five releases in the Souls-borne saga, maybe change is exactly what could revive the challenging subgenre. Though, I’m not entirely sure it needed revival in the first place.