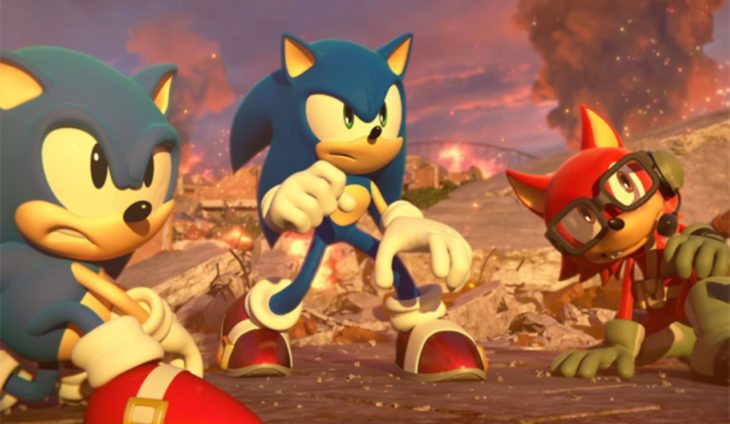 Sonic teams up with a new hero

With the rise of platforming titles coming to living rooms this year, the popular blue blur – Sonic the Hedgehog – has not one, but two new releases. The first – Sonic Mania – delivered and unprecedented run through with what made the original series standout among the rest of the herd. Now with the second release – Sonic Forces – right around the corner, Sega will try to keep fans engaged and boldly return to the 3D playing field.

With Sonic Mania, players were driven backwards in time when the “fastest thing alive” ran rampant on early Sega consoles. In true 16 bit fashion, Sonic returned to many levels featured from the glory days of the original Sonic the Hedgehog release, right through the next two in the series, right up to the acclaimed Sonic & Knuckles title. Borrowing levels wasn’t the only trademark featured in the Christian Whitehead developed Sonic title, but the visuals, graphics, sprites and special stages also made a demanding appearance.

With the latest Sonic title resurging the franchise to what it was once known for, Sega is boldly sticking to their guns and not giving up on the idea of Sonic in the 3D world. Following the same path as the 2011 release – Sonic Generations – the game will continue to combine the 3D modern era Sonic with the more classic 2.5D approach. By switching back and forth between the two gameplay mechanics the player will be able to reach areas otherwise not seen in one perspective or another.

Each perspective is also played by two different Sonic characters, i.e. Modern Sonic and Classic Sonic. Along with differing camera views, the two Sonics also have unique abilities specific to each one. Modern Sonic is equipped with the tactful homing attacks, while classic uses his traditional spin dash, as well as the new Sonic Mania ability – the drop dash.

The resistance is formed

The story of Sonic Forces continues the ever-lasting rally against the evil villain, Doctor Eggman. Now paired with the newest rival, and ally to Eggman – the mysterious being, Infinite, helps the rule the free world with the evil Doctor himself. The resistance group led by Knuckles, Sonic – and his past-self, Classic Sonic – team up with the new rookie team member to defeat the robotic ruler.

Plenty of appearances from long time characters will have their place in Forces. Metal Sonic and the dark clone, Shadow the Hedgehog will aid Eggman as well, and reign with the robotic army in Forces. Sonic, his former self Classic Sonic and the newbie rookie have their work cut out for them in the latest installment of the modern Sonic era.
Releasing two Sonic titles in one year not only caters to fan bases from both era’s, but could also help pull the slumbering franchise out of the rut it’s been so infamously dwelling in. The high praise for Mania – including RG’s review of the 16 bit platformer – wept the plundering hedgehog off his speedy feet, and in turn gave the franchise a subtle, yet demanding new light of day.

Joining the forces of sonic, Avatar – the “new guy” – allows players to customize and create their very own hero, with an appearance straight out of the realm of Sonic. By choosing between one of seven animal classes each with their own unique skill. With this combination of the Avatar and Sonic, the duo will be able to alternate throughout specific levels, much like the 2003 title Sonic Heroes.

More gameplay mechanics than before

Forces will have you blasting through levels at high speeds with a third person perspective when controlling modern Sonic. Collecting rings, hitting speed and jump pads, ploughing through enemies at the right moment or eliminating the baddies with the useful homing attack, Sonic Forces is bringing the hard-hitting features that stood out from Generations. Ramping and boosting through the levels, the screen with frequently turn to take on a 2D perspective, similar to the 16 bit era.

In classic mode, Sonic will run in the 2D sidescrolling camera angle from the golden era of Sonic. Now in smooth HD visuals compared to the 16 bit days, with loads of new obstacles and enemies, the twist between classic 2D Sonic and modern Sonic will leave the player catching their breath after each act.

In Avatar mode, the player will first be designated to customize their character. Joining the forces of the resistance after surviving Eggman’s attack on the city, the Avatar mode will add even more the Sonic Forces lineup of content. First choosing a class of animal, there are seven different types of animals to choose from, such as a bear, a dog, cat, wolf rabbit, bird and, of course, a hedgehog. Next you’ll be required to choose different unique style to help personalize your character a little more. Then, we’re off to save the world from the evil Doctor Eggman, and Infinite.

When using Avatar, the same 3D and 2D perspective changes still occur, but also equipped with a wrist-attached grappling hook. Also unique to Avatar, is the helpful ability of being extremely agile when running through levels. Air jumps, tight turns and other grappling hook skills all give the series a little more flare. Using these special abilities the reach new areas and different platforming methods, Avatar will play a crucial part in aiding Sonic, and the rest of the team against Eggman.

With Sonic Forces, Sega is proving they are confident in the future of the modern Sonic era. While Sonic Mania has given new light to gamers – both new and old – that there’s still plenty of steam left in the barrels. Whether or not that can be converted into positive momentum moving forward, or flutter and seep from the seams in failure remains to be seen.

Look for Sonic Forces releasing next week on multiple platforms, including the PS4, Xbox One, PC and the Switch.