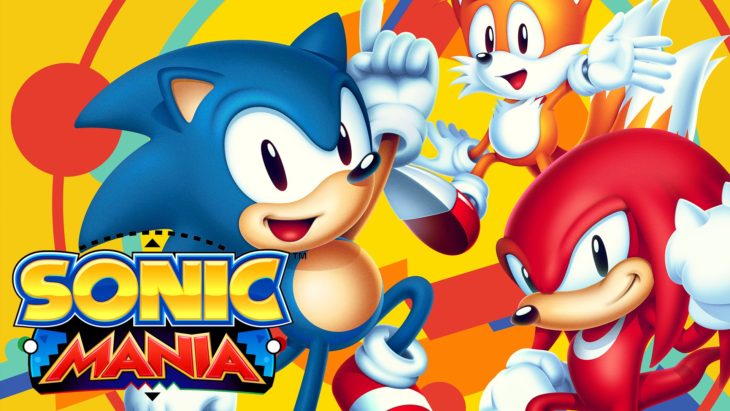 Sonic fans everywhere have been itching for more 2D 16-bit action since the beloved classics of the Genesis trilogy to the crowd favorite, Sonic & Knuckles. Since, Sega has tried tirelessly to invent new formulas to create something fresh and iconic for the rapidly tiring franchise. The newest digital release, Sonic Mania, is setting out to start a new chapter by returning to the beginning.

An instant rush of nostalgia breezes past your senses as the famous “SEGA” logo rushes passed the screen. The famous “Blue Blur” promptly appears on the title screen, thus leading you to the save/stage select screen, as seen in the Genesis classic, Sonic the Hedgehog 3. Upon starting a new game, you also have the option of selecting your playable character between Sonic, Tails, Knuckles or the vintage duo, Sonic and Tails paired together.

With a perfect mix of enhanced and lengthened classic levels from the originals with new, modern levels that fit seamlessly with the classics, Sonic Mania delivers a prompt and sturdy reboot of the 16-bit generation. Popular levels like Green Hill Zone from the original Sonic the Hedgehog, Chemical Plant Zone from Sonic the Hedghehog 2 or Flying Battery Zone from the acclaimed Sonic & Knuckles, all have massive overhauls featuring both replicated areas from the initial levels, as well as brand new additions increasing the length and challenges throughout.

New levels that follow the traditional layout of the classics are worthy adaptions and further show off Sonic Mania as a new title, not just a collection of ports and reimagined level designs. Never-before-seen puzzles and platforms are scattered throughout the updated realm of Sonic the Hedgehog. Capping off every act is a new powerful machine or boss battle to challenge long-time fans and newcomers alike. From being chased by Dr. Eggman’s giant bomb-throwing mech to a pivotal game of Dr. Robotnik’s Mean Bean Machine, there are plenty of entertaining battles featured across the game.

Making a return from the Sonic 3 & K games are the addicting, fast-paced, blue sphere-collecting Special Stages. Now as the “star halo‘ checkpoint stages, returning players will be pleased to know that many of the stages are the originals designs from the earlier titles. Completing these stages won’t earn you any precious emeralds, but do unlock various bonus features and extras, like the 16-bit classic, Debug Mode.

The Big Ring stages where players collect Chaos Emeralds are now brand new “Chase and Capture” events. Running through a 3D “go-kart” style course, the player chases an enemy UFO that has an emerald in its possesion. Picking up blue and yellow spheres that increase your speed, and scattered rings which act as your timer, you’ll navigate over jumps, spikes and across turns and shortcuts before the timer runs out to take back a coveted Chaos Emerald. Once all seven emeralds have been acquired, like the originals, you’ll be able to transform into a “Super” version of Sonic, Tails or Knuckles, granting increased speed and invulnerability to damage for a specific time-limit.

With many of the old favorites still in play, and the basic formula of Sonic’s early success combined with addicting and imaginative new areas, Sonic Mania delivers the exciting rush of speedy platforming, imaginative enemies and bosses, and levels that once rocketed SEGA’s icon to the top of the gaming throne.