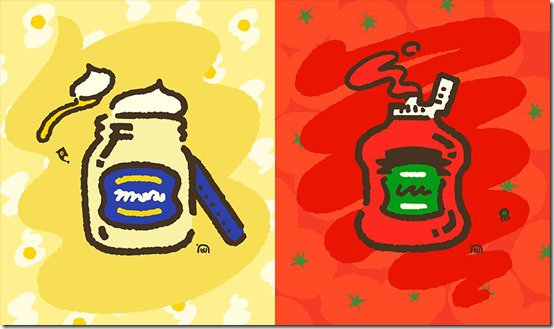 The results for the recent Splatoon 2 Splatfest event are in and the results might surprise you.

For those who missed this Splatfest and don’t even know what a Splatfest is, it’s a special event in the Splatoon series. It pits two teams against each other in Turf Wars where both teams race to cover the map with as much ink as possible to earn the victory. This event was about food and had to two teams fighting over which was the better condiment: Ketchup or Mayo.

Japan is a little bit out of place compared to the other results. Mayo was the most popular team and received 56% of the vote while Ketchup only collected 44%.

Here are the battle results:

Clearly Mayo took the victory in Japan then with 2:1 win.

Now this result is quite surprising. Ketchup dominated the popularity vote with 73% of the vote. Surely with this amount of popularity, Mayo should have been destroyed? That’s not what happened.

Despite being considerably less popular, Mayo was able to sneakily grab some extra wins to give them the overall 2:1 win. Sorry ketchup lovers.

The final hope for Ketchup was Europe then. However, it didn’t quite go as planned. Ketchup still took the majority vote at 66% but this wasn’t enough to win matches.

What happened to Ketchup?

Well the current thoughts on this is do with the fact that Mayo had a smaller player pool. As a result, may matches ended up being Ketchup vs Ketchup which didn’t count to the final total. In addition to this, having less players actually means that the Mayo team had a higher density of stronger players. The Ketchup teams were often filled with inexperienced players. These are just theories however.

What team did you fight for in this Spaltfest? Let us know!