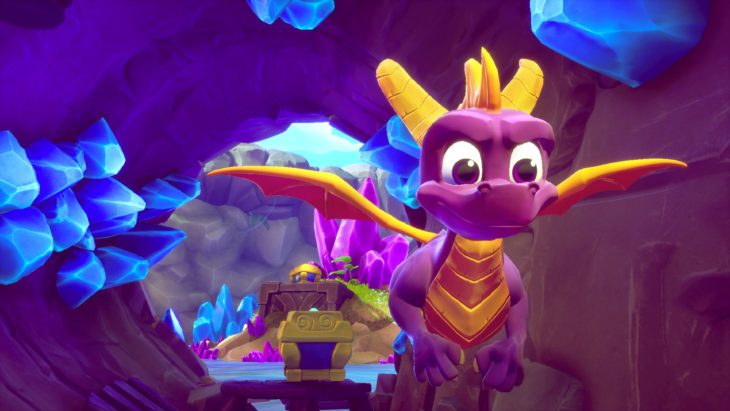 A Refreshing Revisit Of An Icon

The Spyro the Dragon titles on the original Playstation console grabbed a hold of the gamers so tightly that to this day we haven’t forgotten them. Maybe it’s the industry cleverly rewinding the clock back with awe-inspiring remakes of classics that’s triggered our need for the nostalgia itch. But what Toys for Bob has done with the purple dragon’s debut trifecta in the Reignited Trilogy is nothing short of pure, unmatched joy through an adventure brimming with sentimental reflection.

If unfamiliar with the stories told throughout the three original Spyro games, the cocky flame-spewing dragon is pinned into bring back peace to the colorful worlds found within the various realms of the Spyro universe. The engaging platformer takes players through tons of partially linear levels brimming with various collectibles that continuously keeps its charm from start to finish. The combat is simple but has just enough strategy tacked on to hinder any form of over-usage, while gathering every gem, dragon egg or talisman never seems like extra baggage for the sake of keeping players busy.

The original trilogy created a formula for the fans of light-hearted, easily enjoyable experiences with challenging puzzles, mini games and easily approachable boss fights. There’s never an obstacle that feels too overbearing, nor does the game feel like a casual walk in the park. The series has aged remarkably well, and Toys for Bob has helped reunite long-time fans with a beautiful series that’s gone on to inspire other games in the genre throughout the past two decades.

With three major installments in the Reignited Trilogy, each Spyro game graciously offers more than the next with each iteration. The debut release, Spyro the Dragon, is more of a straight run through the dragon realms, while the second and third releases gradually pour extra content into the lap of the player. Ripto’s Rage takes the debut Spyro advenutre a step further with more collectibles and adds unique power-ups to the evolving gameplay. Year of the Dragon produces the most diverse formula in the trilogy with even more side objectives to accomplish outside of the traditional Spyro side-questing events.

The world has come to life with the awe-inspiring direction that Toys for Bob has steered the purple dragon trilogy. Players meet and greet a plethora of characters that have been given new life in the modern age of video games. The cast of characters flow vividly with new animations, grass sways in the breeze carefully hiding precious gems, and the series trademark platforming performs better than any other in its class.

Collections Throughout the Spyro Kingdom

The trilogy overflows with casual fun swirling around a treasure hunt of artifacts awarded through solving trivial puzzles and other menial tasks. And while completely optional, the side content still manages to persuade players into pushing for more hours poured into the game. The story engagements have players exploring each level for specific collectibles which help chug the narrative along while unlocking more worlds in the Spyro kingdom.

The game separates itself with a handful of themed worlds that harbor unique levels each with their own unique personalities and characters. The debut Spyro title is an excellent method for grabbing the basics of the iconic platformer, while the second and third installments add a great deal of depth to the experience. Power up checkpoints create some unique moments for fireball breathing, speedy checkpoint races and high-flying jumps for those hard to reach areas are scattered in nearly every level throughout both Ripto’s Rage and Year of the Dragon. These keep the gameplay from ever growing too stale to finish, but the game manages to keep its head held high without branching away from its roots.

The Spyro Reignited Trilogy charmingly sets the bar for what classic remakes should aim to be. Players are instantly teleported back to an age where the 3D platformer was just beginning to get it’s legs, all the while refreshing the original Spyro adventures to a visually stunning, nostalgia infused masterpiece.

A series of games that simply bursts at the seams with intoxicating platforming challenges, short but titillatingly sweet mini games, and the graphic fidelity to keep you grounded in the modern era, the Spyro Reignited Trilogy is a joyous wonder of amusement and immense gratification. The remake glistens across all three entries in the series while casually pushing the player through a trilogy that keeps on giving.