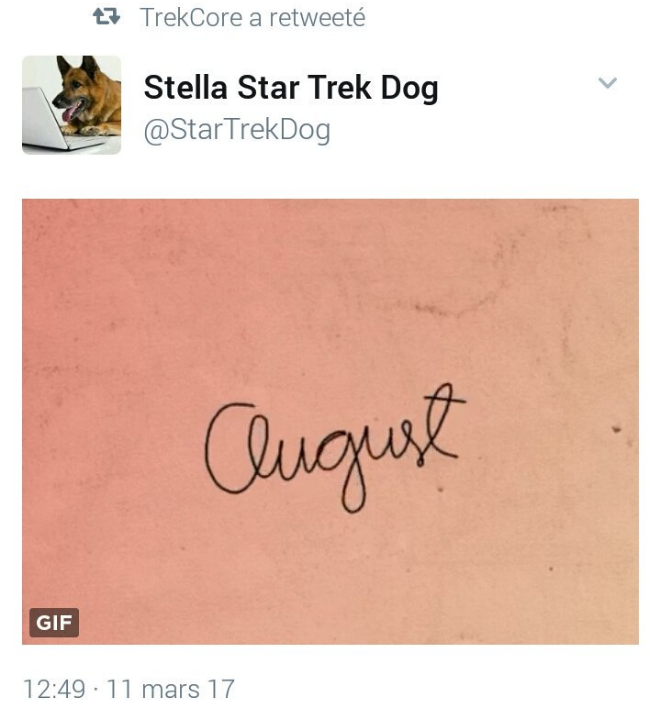 Star Trek fans may have some good news, and something to look forward to, after a tweet was posted on Twitter that could provide the release date. The tweet was posted by Stella Star Trek Dog, the account belonging to one of the Star Trek: Discovery writers.

A single image stating “August” was posted online several days ago. Since then, the image has been taken down, but some quick fans and media outlets took screenshots of the message. Trek Today states that the account is run by Nick Meyer for his dog, Stella. There hasn’t been any official confirmation for this potential release date, however.

It’s currently uncertain if the show will be launching in August, but production for the show is now underway. Last week, Jason Issacs joined the crew of the Discovery and will play Captain Lorca. The cast for the show should be almost complete and the team should be ready for production soon.

Hopefully, someone from the crew will confirm this August release date very soon.

Meanwhile, Diamond Select Toys (DST) has posted a new Art Asylum blog post which covers some questions about upcoming Star Trek toys and products. DST’s Chuck stated that there is currently nothing in development, but they seem to be very eager about the potential for the show.

He stated, “We have ongoing talks with CBS about Trek all the time – we’re known to be persistent, so you never know. As more is known about Discovery, I think those talks can begin as well.”

It certainly seems very positive right now, and once DST gets the go-ahead, the company could produce a wide range of products related to the new show. There’s no word on a release date for any of these future products, though, so Star Trek fans will need to wait a few more months.