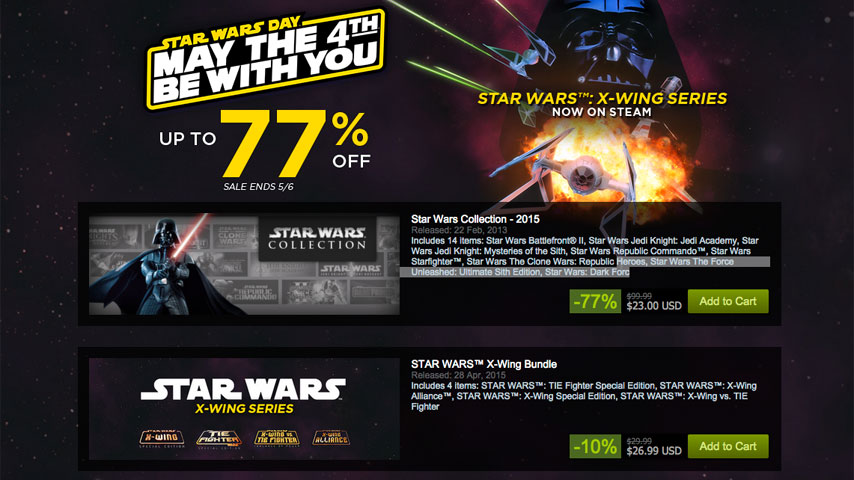 Star Wars day was earlier this week and we celebrated by listing the top 5 Star Wars games ever made. Fans of the universe celebrated the day in a variety of ways. One such celebration saw the closure of a high school after the police were called. Digital retailers are also celebrating Star Wars day by putting a huge number of games on sale.

Steam, GOG and Humble Bundle all currently have huge Star Wars sales currently ongoing. The prices between the three platforms seems to be slightly different however. While Battlefront 2 is currently on sale at 74% off on GOG, both Steam and Humble Bundle have it discounted at 75% off. This isn’t the only price difference between the three platforms. There seems to be quite a few differences between GOG and the other two.

Steam is currently offering 78% off the Star Wars Complete Collection bundle. This includes classics such as Battlefront II, Starfighter, Knights of the Old Republic and Jedi Knight II. It also includes the Lego games and The Force Unleashed II.

However, Humble Bundle has a variety of different Bundles/Collections right now. The games are predominately split between: X-Wing, Classics and the full Star Wars Collection. The full collection includes a mixture of popular classics such as Battlefront II and more recent hits such as The Force Unleashed. This collection is on sale at 77% off while the Classics Collection is only on sale at 50% off.

The Classic Collection includes fewer games but each of them are a classic Star Wars game. It includes games such as Rebel Assault, Rogue Squadron 3D and X-Wing Alliance. However, this collection of games doesn’t include Battlefront II.

Anyone interested in purchasing some of these classic games should know that these sales will be ending next week. Steam will be ending their sales in just over 2 days time while GOG and Humble Bundle have their sales on for another 5 days.