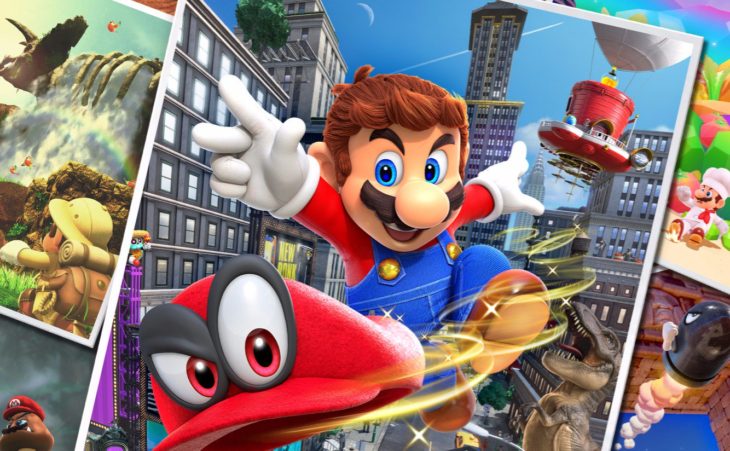 With Nintendo and the Mario series, countless game fanatics have laid their foundation for their wonderous and extravagant journey through gaming history right at the feet of the goomba smashing plumber. And once again we’re all reminded as to why this franchise still soars alive and well with its latest release, Super Mario Odyssey.

Many strive for the casual yet addictive and charming gameplay, which tells the same story, hit after hit; but does so with new and enchanting abilities to keep each entry in the series feeling fresh and outright compelling. Using the all-new ‘Cap-ture’ ability, Mario can become and control a large portion of various objects and enemies throughout the kingdoms featured in Odyssey.

After a scuffle with the mighty Bowser aboard his skyship, Princess Peach is (surprisingly?) kidnapped by the bruising turtle. Helping out Mario on his endeavor to once again rescue the famous damsel in distress, the new possessed hat companion – Cappy – tags along to save his sister Tiara, who has also been taken prisoner by Bowser. Embarking across the globe to stop the giant turtle from forcibley marrying Princess Peach is the ultimate goal, but prepare for quite a few stops in some of the strangest kingdoms the Mario world has to offer along the way.

Once partnered with Cappy, you’ll discover new abilities not found in Mario titles before, but amazingly mold with the precise formula that has kept the series running strong for decades. Aside from being used as Mario’s most effective weapon, by tossing Cappy onto specific key enemies or objects, Mario’s entity is then absorbed into that particular object or persons, granting a new arsenal of skills. Throughout the game you will be tasked with thinking of new and clever ways to reach tons of Power Moons by using the skills of Mario’s enemies.

Aboard The Odyssey – the flight vessel which takes the heroic duo across the globe – you’ll travel from one kingdom to the next, initially landing to discover a specific number of Power Moons, in turn adding many more objectives along the way. Each open world, ranging from the underwater world of Lake Kingdom, to the frigid cold temperatures of the Snow Kingdom, or to the bustling streets of New Donk City, are littered with tons of inventive and creative tasks. Earning shiny Power Moons is the main objective for keeping up with Bowser’s skyship , as they provide fuel for The Odyssey ship.

As you traverse the multitudes of kingdoms found throughout Odyssey, you’ll discover a wide range of new abilities to dive right into. The various quirks and imaginative ways of gathering Power Moons and completing tasks proves unbound by normal strides found in typical Mario puzzle solving. Taking the form of a bolt of electricity running through power lines, a towering stack of Goombas for out of reach places, or even becoming a T-rex to clear the path of enemies are only a small example of what lies ahead in Odyssey.

As I’ve stated, the story never throws any surprises your way, and everything is presented in typical Mario fashion. That being said, saving Peach has never felt more exciting than ever, visiting one kingdom after another – experiencing the many themes, colorful baddies and the many interesting situations Cappy will get you out of. Along with the numerous open world levels and unique Cappy abilities, there are also other thrilling features found in Odyssey – like the arousing combination of 3D and 2D gameplay.

Taking players back in time with many familiar sounds and level designs of the early releases in the franchise, Odyssey also uses a 2D sidescrolling focus featured throughout the kingdoms, adding a broader sense of varying gameplay mechanics. Tons of old school sounds, as well as revamped songs from the 8 bit days will ring out throughout your journey, reminding you exactly how far along the series has come as you trounce goombas and turtles, as well as collect coins, health hearts and Power Moons between 2D and 3D plains.

As you land in each kingdom, players will then be tasked with finding a specific amount of Power Moons acquired by exploring the world and discovering characters, areas and, of course, new abilities using Cappy. Like the stars found in previous Mario entries, Power Moons may be found, bought and earned across each and every kingdom. On top of Power Moons to collect, coins are also collected throughout Odyssey, but for different reasons than before.

In Odyssey, the extra life system has been abandoned for a more casual approach to dying. Mario is automatically equipped with a three-hit life bar presented by the traditional heart divided into three sections. Upon losing all heart sections, the player then restarts at the nearest check point, which is never far behind, at the expense of a few (around 9 or 10) coins. Upgraded heart pieces may also be found which temporarily adds three more hits to Mario’s life bar, increasing the amount of damage allowed.

With the loss of the extra life system, the coins become more valuable than ever. However, soon enough you will collect hundreds – if not thousands – of coins, providing players with a more casual approach when it comes to losing health and taking damage. This being said, coins are also offered as currency to buy numerous items in stores found in every kingdom. Buying new outfits, as well as helpful items like heart powerups or even Power Moons are excellent ways to help spend some of that precious coin.

Purple coins are also scattered in each kingdom, taking specific shape coordinated with the theme of every kingdom. Only a certain amount of these rare coins exist in each kingdom, and the may be used to purchase more uncommon or rare items found in Odyssey. While the regular coins redistribute after everytime you load into the level, the purple coins may only be collected once per playthrough.

Chasing after Bowser and his gang of villainous rabbits, known as The Broodals, they will rampage their way across the globe for the most prized possessions offered in each kingdom. Whether they’re after the Bonding Ring from the Sand Kingdom, or the Frost-Frosted Cake from the Snow Kingdom, Bowser and his minions are after wedding related items in preparation for his desperate attempt to marry Peach. The Broodals delay Mario and offer boss fights at the end of most kingdoms.

The boss fights in Odyssey are a casual bout featuring strategic usage of Cappy to help stun enemies. The battles are clever enough to keep the brain ticking on conquering the boss, but never leaves the realm beyond anything more than trivial. Dodging their attacks, using Cappy to stun, then bopping the enemy on the noggin is the most common tactic Mario will see in his newest adventure. While this adds a sense of repetition to the game, each time you face off against one the evil rabbits, or even Bowser, the difficulty continues to raise with each battle.

Though the story to Odyssey is lackluster, non-original and runs just under the 20 hour mark, there’s still tons to discover after the ending credits roll. From a series that has made one of the most successful franchises in the entertainment medium, dozens of spin-offs stretching across three decades and continues to impress time and time again, Nintendo once again delivers a worthy Mario title relentlessly pushing the series to new heights, all while telling the same old story.

Traversing the surreal world of Super Mario Odyssey comes with excellent and charming features to keep the franchise running strong. With the addition of Cappy and his unlimited ability to possess a long list of living creatures or other objects, Mario explores new and bizarre worlds like never before. Using the idea of creating simple solutions by altering the world around you, Odyssey takes one brand-new idea and opens the door for an enormous amount of exciting possibilities.