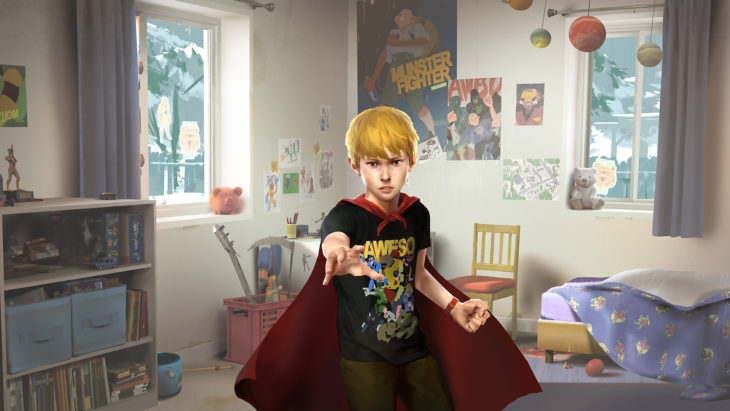 Making the Best Out of Every Situation

Dontnod Entertainment created an unforgettable story titled, Life is Strange, which weighed in heavily on emotional circumstances and player decisions. Revolving around Max Caulfield and the trials and tribulations that comes with teenage life both inside and outside of highschool, many fans of the game are eagerly anticipating the upcoming sequel. While the sequel is still a couple of months away, the free-to-play demo takes awaiting fans into an imaginative world as the young child, Chris, in The Awesome Adventures of Captain Spirit.

Captain Spirit is a fictional super hero created by the young protagonist in the demo of the Life is Strange universe. Acting as a catalyst for the motherless little boy drowned in his father’s acloholism and errand ways, Chris finds his own methods of finding the simple joys in life on a snowy Saturday afternoon. Players will discover tons of interesting and creative obstacles to overcome throughout the short demo, all of which lead to an eventual ending that will leave you hanging by the edge of your seat begging for more.

While not directly tied to Life is Strange 2, The Awesome Adventures of Captain Spirit is said to be filled with plenty of nuances and easter eggs that players will later discover after the primary sequel is released. With a familiar formula found in the Life is Strange series, players will explore their surroundings in hopes of uncovering game changing actions and move the narrative forward in every way possible. Whether you’re cleaning up after your inebriated father or taking some time to play in your treehouse converted secret hideout, the sheer authentic and emotionally charged story is enough to keep players mesmerized by the touching story of the overly imaginative boy.

From the get go, it comes off as obvious that Chris’ father isn’t exactly a perfect role model or father figure. With empty beer cans littering the counter tops in the early morning, to the downed whiskey bottle mid-way through the demo – it’s apparent that Chris uses his alter ego to escape the confines of a troubled home life. And while the alter ego, Captain Spirit, isn’t the most fearless super hero, he is a perfect symbol for what scared and scarred kids hope to become after overcoming tremendous odds in a broken home.

Throughout the demo players will notice a few changes to the recipe found in the Life is Strange, most notably the ability to trigger exciting new actions that reflect super human powers. While most of these actions are subtle and charming methods of Chris’ overactive imagination at work, such as burning firewood with his mind or using telekinesis to power on a television, the demo does offer some exotic looks into his imagination firsthand.

Taking on the fierce “Water Eater” in the garage or wiping out the menacing “Snow Mancer” who sits frozen in the backyard are just a few examples of allowing Chris’ imagination to firmly grasp reality. To go along with the theme of Captain Spirit players may bring up a drawn out list of accomplishments, that of which acts as a checklist of activities to partake in throughout the duration of the demo. And what would any super hero be without their trusty cape and identity sealing mask, which must be constructed and equipped in order to perform many of these daunting tasks.

The dramatic overtones throughout the daytime journey through a child’s thoughts are perfectly captured in a number of different locations, each ripe with their own distractions. The living room has his reactive father watching the ball game while the backyard is a snowy wonderland brimming with fantastic wonder. A small trip to the bathroom can playfully lead into a makeshift TV interview conducted in the mirror, or thoughtfully peering into your fathers bedroom might bring forth soft memories of your late mother. The charm and evoking emotions are literally around every corner throughout the demo, and the ability to act on many of these discoveries makes Captain Spirit all the more worthwhile.

While only a demo, finding the time to sit through a session of meandering tasks that ultimately lead nowhere might be difficult to digest at first, but once in thick of the Saturday afternoon with Chris and his imagination it’s hard to let go. And for those eager to unravel the upcoming Life is Strange sequel, The Awesome Adventures of Captain Spirit makes for an easy and thought-provoking distraction cautiously touching on the many hardships of life; and how we can escape theme, even if for a moment.

Trailblazers Review – Painting Your Way To The Finish

For a free-to-play demo that can last anywhere from 30 minutes to 3 hours depending your decisions, Dontnod Entertainment has warmly set up their upcoming sequel that positively displays they haven’t lost their touch with emotionally heavy dialogue and settings. Using the world around Chris to creatively escape the shackles of borderline heartbreaking scenarios is exceptionally well done, and leaves us tightly wound in the wake of the unexpected events that close the thrilling experience out.