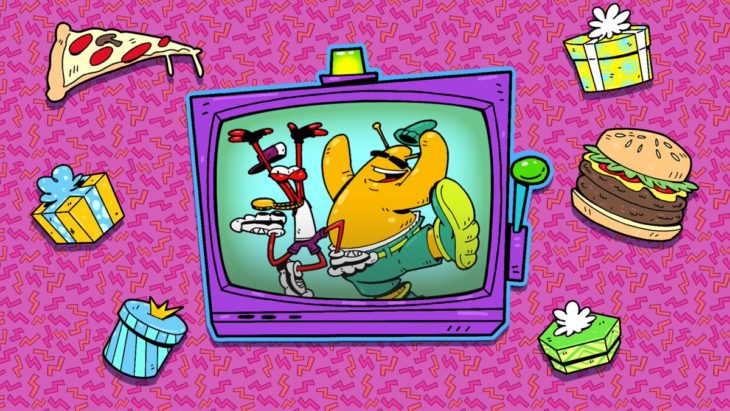 Taking a page out of the retro days from the Sega Genesis/Master System, HumaNature Studios brings back the groovy adventure game featuring the hippest space aliens around. ToeJam & Earl: Back in the Groove is a perfect blend of the traditional recipe found in the original title with a few of the newer features seen in the later entries of the series. But how well does a game like ToeJam & Earl fit within the modern age of relentless attack patterns, lively NPC interactions and gripping narratives? The short answer to that: not as terrible as one might assume.

Check out our video review of ToeJam & Earl: Back in the Groove below:

The game gives off that same vibe and look that fans of the classic title will remember. Shot in a fixed isometric camera angle, players can play as a couple of different characters in the ToeJam & Earl universe, including the classic versions of the star aliens themselves. The name of the game is exploration, collecting presents, using said presents and, most importantly, finding all of the missing pieces of your spaceship. It’s an odd universe that the jazzy dynamic duo finds themselves in, bringing with it a number of challenges.

For those unfamiliar with the ToeJam & Earl gameplay, you essentially navigate a number of floating islands in space in search of useful powerups, money, food for health, bonus areas and interesting helpful characters. While the most important items to keep an eye out for are the missing spaceship parts, it feels almost equally important to keep your player, or crew, stocked with a variety of presents. These gifts help get the primarily under-achieving aliens a chance at surviving later levels in the game, as there’s virtually no combat or attack scheme within ToeJam & Earl. The game’s premise is more about surviving the odds that are typically stacked against your favor, and finding your way out of the alternate dimension you so callously got your and your crew sucked into.

Back in the Groove hearkens back to the debut ToeJam & Earl title, giving off a rebooted aura. The visuals create a modern appeal to the game while the gameplay attaches itself to what we know from the original. Each playable character can change the way players approach each challenge, as each character comes equipped with different stats. Speed, inventory size, health bar size and present skills are some of the stats each character is graded in, but players will also have the opportunity to upgrade their stats throughout the game. Taking advantage of a character’s strength and playing against particular weaknesses is the name of the game early on, but once skills start to upgrade the game becomes about survival.

As mentioned above, ToeJam & Earl aren’t the aliens society would have you believe they are. They’re pacifists who prefer jamming to funky tunes rather than probe or abduct any human species. With this in mind, it needs to become apparent that players will rarely find themselves praying and spraying in hopes of wiping out hordes of vile humans, but rather outmaneuvering enemies or utilizing one of the many presents found across the galaxy to strategically make their way around each level. And while most often the gifts you receive will more than likely help you on your quest for ship parts, occasionally they will play against your favor.

Walking and exploring each level is a simply structure. There’s a map for each level that uncovers itself the more your explore each area, but often times can be difficult to do so considering the terrain layout or the amount of evil-doers standing in your way. And while finding the hidden spaceship part on each level is your top priority before boarding the elevator up to the next area, it does much more good than it does bad to stick around and discover everything you can on almost every level. Your character, be it ToeJam, Earl or newcomers Lewanda or Latisha – as well as a few unlockable hidden characters – all have their own stats, and the more you discover, the more experience you gather to level your character up.

What ToeJam & Earl: Back in the Groove does best is drive players towards uncovering each map. While after a while you may not find many surprises left in the game, you’re still being rewarded for taking part in the worlds exploration. The unlimited search skill allows players to discover hidden items in the trees, shrubs and even houses within a certain diameter of the player, allowing the player to never leave any stone (or tree) unturned. And while you’re busy searching every nook and cranny within the game world, collecting valuable gifts and finding that coveted ship part, there’s also a few mini games that keeps the gameplay somewhat diverse.

Occasionally, players will come across one of their allies within the rather unfriendly dimension. While most of the other characters walking around the open level are human species looking to harm or capture the alien squad, there’s also a good amount of friendly faces that have your back. Some NPC offer you gift exchanges, others may be hired for a brief time period to help you out on your adventure one way or another, while some might just point in the correct direction to your goal. With the influx of evil humans you’ll find yourself crossing paths with, it always seems pleasant when you come across one of the good ones.

What’s In The Box?

And when they’re not there to help you out, it’s best to keep on your toes. While various presents and gifts usually allow players to find their way around traps and pushy Earthlings, players won’t always have a gift to help them out in any given moment. Presents are most often a surprise to the player upon opening it, so when you do decide to use one, it typically feels like a risk. When attempting to dodge a quicker evil NPC and ready to open an unrevealed gift – while you may be hoping for quick shoes, be prepared for anything that may inhibit your getaway rather than help. There’s plenty of luck still within the series of ToeJam & Earl, which is probably why luck has its own stat line for each character.

When one does manage to craftily maneuver their way around each level, there are other things to keep an eye out for. One mini-game making a comeback to the series is the rhythmic inducing beat challenge requiring players to match or create their own beats. Features and mini-games like this are completely optional, but rewards players with unique gifts and a bit more money to stuff in their pockets. And aside from the strategic aspect of partaking in these mini-games, some, such as the rhythm based game, offer plain enjoyment and something a bit different form the core experience. It helps create a much more varied adventure from level to level.

There’s plenty that each level has to offer at first, but it does begin to wear thin after a few hours. While diverse gameplay has never been at the forefront of the ToeJam & Earl series, it’s especially present when planted next to the modern era of video games. The idea of uncovering each floating island after the next in hopes of finding a lost space ship part is a bit more interesting than it sounds when you take into account that this isn’t a game where the player is loaded with an arsenal of weapons. Out-witting your opponents becomes a big focus on surviving the more trivial levels later on, but never amounts to anything ultimately challenging.

ToeJam & Earl: Back in the Groove is a great escape back to 90s for anyone wishing to go there. The new visuals helps represent the duo in light and the sound aspect of the game refreshes the funk that once made this series so memorable and enjoyable. While there’s not much to the gameplay a couple of hours after you’ve fired up the game for the first time, it’s still somehow loads of fun to play.

For anyone looking to dive back into a classic Genesis/Master System title but lacks means to do so, ToeJam & Earl is a perfect match. Bringing vintage gameplay style over to the modern era of consoles has worked incredibly well, but anyone looking for something more might be disappointed. With the amount of game changing presents to utilize, up to 4-player co-op either online or locally to party up with, the funky rhythm to keep your head bobbing uncontrollably throughout your time with the game and the strategic elements of not having weapon at the ready creates something new in an age of what seems like constant aggression. Back in the Groove may not be the most enjoyable, fleshed out reboot of a long forgotten series; but it does manage to hold up its end of the bargain when donning the ToeJam & Earl name.