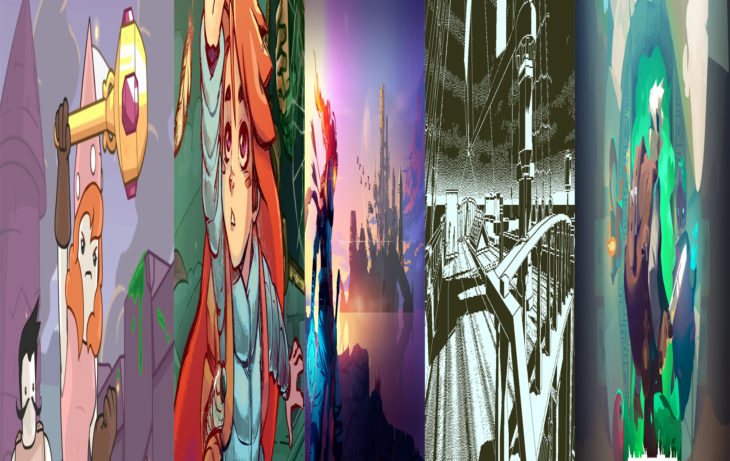 The Best Smaller Studios Have To Offer

The 2018 year is almost finished and throughout the previous 12 months we’ve witnessed a flock of new game releases that continue to impress. While AAA games make their mark in the industry with their massive budgets and developing teams consisting of hundreds, if not thousands of team members – the small, underappreciated indie scene has not disappointed, either.

So, here we are winding down the final weeks of 2018. There’s so much greatness within the gaming industry this year has offered that it’s an incredibly daunting feat to list only 10 games. But, let’s have a crack at it , anyway.

Here are the top 10 indie games to release in 2018, in no particular order:

This groundhog day-like murder mystery action adventure takes a simple gameplay concept of light hack ‘n’ slash elements and combines it with a series of investigative decisions based on the clues you find throughout your adventure. As the Harbinger, players must discover the truth behind the mysterious death of an important figure, or the world will perish. With only one day remaining, you’ll have the unique ability to turn back the clock after each mission while retaining any knowledge of past events to help you make your way towards the truth.

Omensight released on May 15, 2018 and is available on the PS4, PC and, most recently, the Switch.

Wrestling your way through platforming levels filled with countless baddies in an epic luchador outfit is all but a bad time in the latest in the Guacamelee series, Guacamelee! 2. The vibrantly colorful world of the Mexiverse pits players against tons of foes, allowing to utilize the ultra-slick Mexican wrestling based abilities. Challenging platforming obstacles, intense combat situations, unwavering wrestling maneuvers all grounded into a metroidvania core easily creates one of the most memorable experiences to land in 2018.

The platforming action perfectly meshed with the 2D combat and various puzzle solving highlights the beauty found in Konjak’s Iconoclasts. Collecting the many useful tools/weapons throughout the game pushes for further exploration and more unique methods of tackling your foes. The retro stylized visuals, charming mix of gameplay elements and absorbing soundtrack all make the long wait for this indie gem well worth the experience.

Return of the Obra Dinn

Possibly the most uniquely designed game on the list – or all of 2018 – is the first person puzzle game, Return of the Obra Dinn. The visuals alone are enough to turn heads as players explore the once lost ghost ship, the Obra Dinn, in old-school monochromatic computer style graphics. Using the power of a supernatural device, players will investigate their surroundings in the Obra Dinn in order to uncover the truth behind what happened to the crew of 60 members, and how they met their fate. There’s no other game like Return of the Obra Dinn, in 2018 or in recent years. The truly unique experience is flooded with interesting lore and in-depth problem solving that constantly pushes players towards the unnerving truth.

Return of the Obra Dinn released on October 18, 2018 exclusively on PC.

From the creators of the colorful co-op beat em’ up, Castle Crashers, comes the tactical turn-based action game, Pit People. The Behemoth delivers a quirky, fun and fresh take on the strategy genre by bringing in a grid-based battle board combined with addictive gameplay and all-too hilarious dialogue. Most importantly, throughout the engaging adventure players may team up with others and share the fun of strategically placing your team members in the most effective positions possible, and unlocking powerful new allies as well.

Pit People released on March 2, 2018 and is available for the PC and Xbox One.

Traversing through dungeons, striking down a seemingly endless amount of dastardly foes and cramming your pockets full of precious materials is all part of the classic dungeon crawling, action RPG experience. But what Moonlighter adds to the mix is the creative and habit-forming element of store management to earn a thick pocket of income. Collecting these valuables throughout the dungeons for weapon and equipment upgrades is one aspect, but placing your stock of items up for sale can be just as fruitful. Swapping back and forth between old-school dungeon crawling and decisive store management is a tasty mixture, and Moonlighter delivers a perfect mash-up of the two genres.

Moonlighter released on May 29, 2018 for the Xbox One, PS4, PC, and most recently the Nintendo Switch.

Nothing screams addicting gameplay like tight rogue-like mechanics infused with the metroidvania style of action. Dead Cells pushes players to achieve greatness by learning from their mistakes, as well as grinding to enhance their skills and abilities through gritty and tough gameplay. It’s tough to put down a perfected retro-inspired rogue-like game when it’s as pliable as Motion Twin’s action title. But when you’re inching your way through a game as compelling as Dead Cells, you often don’t want to.

Dead Cells officially released out of Early Access on August 7, 2018 for the PS4, Xbox One, PC and Switch.

Closing out the 2018 year is this gracious platformer that embarks players on a journey through depression and requires the player to face their inner demons. Gris is a touching story of a woman whose dress tells the tale, players will whimsically leap across both the boundless mind of sorrow and an environment painted to beautiful perfection. The subtle controls help Gris float majestically across the world full of pain and loss. The beauty found around every gorgeously crafted corner in Gris is awe-inspiring all in its own; but the sheer joy to found in the gameplay itself helps keep this game around well after its closure.

Perhaps one of the most notable indie games to hit stores in 2018 is the icy platformer, Celeste. what makes the challenging indie jumper so charming is the gripping and intense gameplay, the serene musical score and riveting story line. Making your way up Celeste mountain only to uncover the deep personal truths about the protagonist Madeline. As your long and challenging journey begins its dangerous climb to the peak of Celeste Mountain, the game opens up a story of conquering one’s own dark passenger. The responsive control scheme chugging along to every nuance in Celeste is a pure joy to experience, and easily one of the most memorable titles in 2018.

Looking for a charming, simple yet extremely satisfying puzzle adventure, then look no further than The Gardens Between. The concept of taking two best friends through a whirlwind of mind-bending puzzles with only two primary buttons of interaction is as swift as the gameplay itself. Players are pinned with a series of environmental puzzles taking place across a slew of diversely themed locations fitted in a surreal alternate universe. The closure will have you dabbing your eyes from pure emotion as the casually charming puzzler closes out a short, but incredibly sweet adventure.

The Gardens Between released on September 20, 2018 for the PS4, Xbox One, PC and Switch.

And there you have it. Another year, another great line up of stellar indie titles that will go on as some of the most memorable titles that released in 2018.