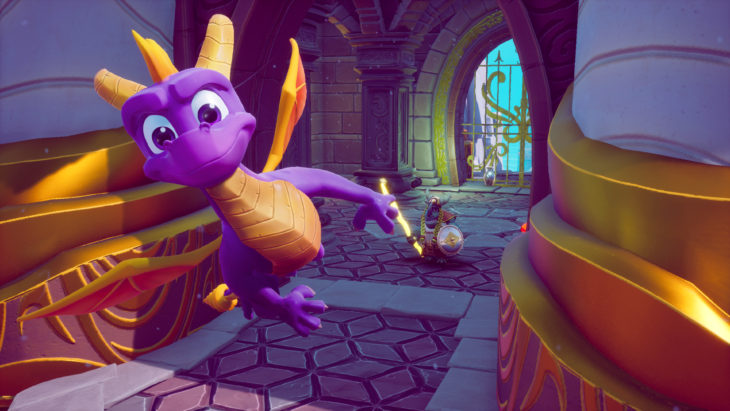 Yet Another Flurry of Big Releases

With the month of October setting itself apart from the rest of the year in terms of quality launches, November is looking like a close second place. We’ve seen some top-notch releases in 2018, and November shines with a handful of highly anticipated titles gamers are eager to add to their collection.

Let’s take a look at the 5 best games releasing in November that will keep this ball of momentum rolling into the new year.

Every lover of the classic Playstation, 3D platformers and charming purple dragons has had this iconic collection marked on their calendars. Taking the original trilogy from the Spyro franchise and remaking them from the ground up is something tons of current gen gamers have only dreamed about since the release of the mascot rival bandicoot trilogy remake in 2017. However, unlike Crash Bandicoot games, Spyro the Dragon offered unique open worlds to explore and plenty of interesting characters to meet. The Reignited Trilogy will provide a trip of pure nostalgia to those craving another flashback in a series that plays an integral role in video game history.

Look for Spyro Reignited Trilogy to hit stores on November 13th, 2018 for the PS4 and Xbox One.

No matter how much controversy Fallout 76 has generated since its official announcement this past E3 there is still a huge audience for this multiplayer take on the series. Many have asked for an option to co-op with friends in the Fallout universe and with Fallout 76 they’ll get it. Explore a massive West Virginian world that expands four times bigger that 2015’s Commonwealth. Take on well over a hundred hours worth of side quests, follow the main story line, scavenge and build your settlement or nuke a section of the map – the options are anything but limited in Bethesda’s upcoming online RPG.

Wastelanders will eagerly hop into the official release of Fallout 76 on November 14th, 2018 for the PC, PS4 and Xbox One.

The next installment in the enormously successful Pokemon franchise is nearly upon us and it’s hitting the Nintendo hybrid console, the Switch. Pokemon: Let’s Go, Evee/Pikachu! is a light remake of the classic Gameboy Color title, Pokemon Yellow. Heading back to Kanto and relive the iconic adventure of capturing all 151 original Pokemon to help defeat the powerful gym leaders. Utilize the all-new Poke Ball Plus controller and really dig into the experience of collecting pocket loads of Pokemon, or perhaps hand it off to a friend in the co-op feature. With a much-needed Pokemon release coming to the Switch, expect plenty of fellow trainers to be hopping on board the release in the legendary franchise.

The Battlefield franchise has easily been one of the largest competitive shooters within the last decade. And with the latest installment from EA Dice, Battlefield V will continue this trend due to the addition of the incredibly popular multiplayer mode battle royale. Along with a month filled with controversial game releases, Battlefield V might be at the top of the list with skewed vision of history by adding cybernetic prosthetics on the battle field. However, with the battle royale addition, it’ll be exciting to see what Dice is capable of in creating a worthwhile experience that differs enough from the other BR titles, but still provides the winning formula from the mode.

Related: What Other Racing Games Can Learn From Forza Horizon 4

It’s been a mighty long wait for the third release in the Darksiders series, but that won’t stop fans who’ve been waiting the 6 long years to get their hands on apocalyptic action-adventure game. Playing as Four Horsemen of the Apocalypse member, Fury, players will approach their duty in taking out the Seven Deadly Sins as ordered by the Charred Council. In a parallel universe to the previous two entries, Darksiders 3 will keep the same ruined Earth setting, but offer a new character loaded with plenty of new abilities and fighting mechanics from past games.

With such a lively month of October a slower pace following would only benefit those who already have their hands full. However, it doesn’t seem like November will be that month, for as far as we can tell there are at least five big names begging for our attention coming next month.