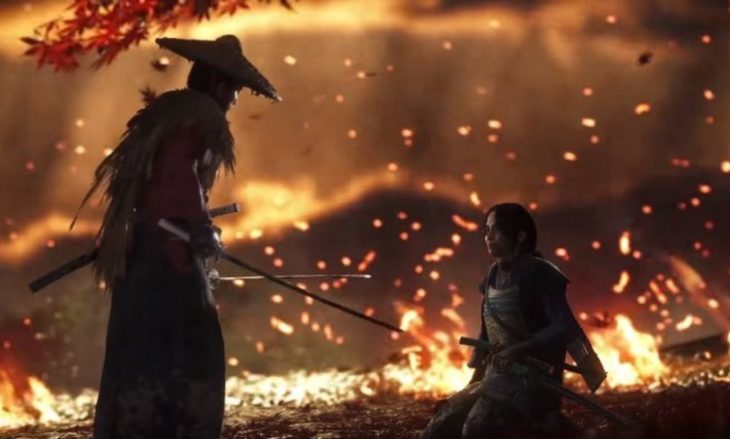 A Bright Future of Gaming Ahead, Indeed

E3 has come and gone yet again leaving a slew of excitable releases coming our way on all platforms. No matter the console(s) you choose to game on there was plenty revealed to be excited about, but here are the top 5 games we’re even more excited to play after seeing them in action at E3.

Everyone has been on edge anxiously awaiting the next IP out of From Software studios. Taking a leave from the popular Souls/Borne series, the developers have teased their latest project – Sekiro: Shadows Die Twice. Not too many details have been leaked on their latest adventure title, but we do have a little insight on what to expect.

Sekiro will feature an interconnected world similar to the Souls games taking players through what many are already labeling a mash-up of Bloodborne with Tenchu. The combat style may be vaguely similar to their Souls combat, but character progression will be significantly different. Allowing players to use their prosthetic arm for a number of unique tools, such as a grappling hook or used as a “trickster” type of weapon similar to Bloodborne is a unique addition. Bringing on a much more stealth-driven approach to many situations, fans will also note that the class system from the Souls/Borne series has also been discarded as well.

While there’s still much to learn about Sekiro, From Software has promised more details to surface at a later date. We can expect Sekiro: Shadows Die Twice to be released sometime in 2019.

The Last of Us is in no way an “under the radar” type of game, and the sequel has boasting a huge amount of anticipation to support this statement. With the reveal of The Last of Us Part II fans everywhere have been anxiously awaiting more details on the emotionally charging survival game from Naughty Dog. And during Sony’s press conference at E3 2018, fans saw their first glimpse of actual gameplay; and, as to be expected, it looks absolutely fantastic.

The story of Joel and Ellie ended with an unnerving feeling of lies and secrets which left a void just pleading for a sequel. It’s no wonder why so many players feel the need to return to the story of young Ellie and her struggles against the world around her, as well as the world inside of her own head. Naughty Dog has shown the industry time and time again they know how to put together a riveting story, and the revealing gameplay footage recharged fans to ecstatic levels of optimism and excitement. We’re still not entirely sure where the story is taking us, but after the heated and brutally visceral combat, and ultimately impressive seamless design of the world, there’s not much else we’re more excited to play than The Last of Us Part II.

Sucker Punch Productions – developers of the Infamous series – have unveiled some beautiful gameplay footage showcasing their upcoming action/adventure samurai game, Ghost of Tsushima. Placing players into the gorgeous world of the samurai era in the year 1274, the unique part cel-shaded, mostly realistic art style brings forth a breathtaking setting of the island of Tsushima during a Mongol invasion.

After an in-depth viewing of gameplay footage at E3 of the wonderfully polished aesthetics, powerful swordplay and a fluid grappling hook mechanic, Ghost of Tsushima breathtakingly excels into what looks to be another must-have title for PS4 owners. While no release date has been officially revealed, expect more details to float up from the developers the closer we get to launch.

The creators of The Witcher series have been hard at work with their newest upcoming IP, Cyberpunk 2077. Leaving the third person camera angle of their acclaimed trilogy, Cyberpunk takes players into a first-person RPG game within a futuristic city overrun by corruption, a cyber-human population and flashy neon lights.

While the first-person mode has many raising a few eyebrows at CDPR’s decision to present a more immersive experience, we have to trust in The Witcher developers and support them with their decision. They have a vision for the game and it includes a massive cyberpunk cityscape that the team has stated will be 4-times larger than The Witcher 3. Years in development and we’re still left without an official release date, but stay tuned for more revealing updates about Cyberpunk 2077.

Easily one of the most anticipated Nintendo Switch titles to be revealed in recent months, Super Smash Bros. Ultimate brings the largest collection of fighters the series has ever seen. Fans are ecstatic to know that every single playable character throughout the series will be featured in the upcoming Smash game, from female Pikachu to Solid Snake, the selection of fighters will also include numerous variations of specific fighters, such as young Link and BoTW Link.

And if that massive amount of characters isn’t enough to sway any would-be newcomers to the challenge, a new character has also been announced to join the lineup. For the first time players will have the option to play as Ridley from the Metroid series. Add in revisioned Smash moves, Gamecube controller support and the return of 8 player combat to the mix – Super Smash Bros. Ultimate looks like it will finally scratch that itch that so many Switch owners have been suffering from since the start of the Switch era.

There were tons of awesome reveals from this year’s E3 that have us plenty excited for the future, but these 5 made the top of the list as our most exciting games shown at the event.