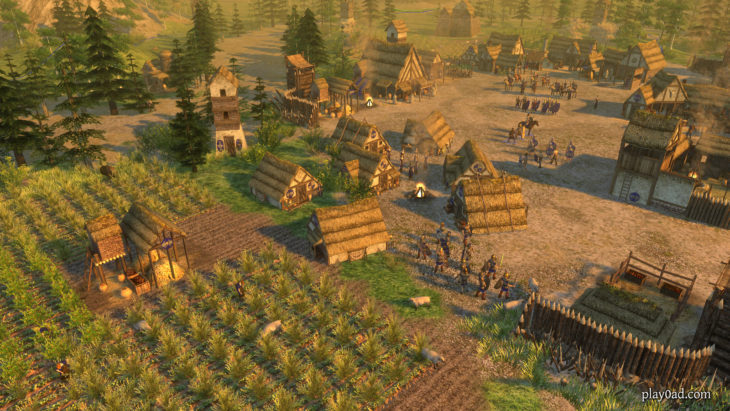 If you like to go on power trips, but the people around you hate when you do, then you should purchase a few real-time strategy games instead. There’s nothing more satisfying than building up a large army and pitting against a formidable opponent.

These 5 games gained massive popularity thanks to their addictive gameplay and satisfying visual performance. They can also be played on older computers, despite having satisfactory visuals. Without further ado, here they are!

It’s impossible to find any gamer that is fascinated by the Middle Ages that hasn’t played Total War. This game is divided into two maps. A large map of Europe and chunks of it’s neighbouring continents, and smaller maps where you fight in real time with armies. You get to choose a medieval faction and fight for complete domination.

Both aspects of the game are excellently produced, and the variety of factions and starting points create a high replayability value. You can also play real-time battles online against your friends. Medieval, Rome, Napoleon Wars are all excellent parts of the Total War franchise. Choose the historical time period you like the best and the game will rock your socks off.

This is one of the best WWII games to ever grace a computer screen. It’s an RTS in which you command a group of soldiers through various missions during WWII. Company Of Heroes has excellent graphics, destructible enviroment, and is strategically realistic. It’s quite simple to play though, which is why it’s a great intro for players who want to try RTS games for the first time.

I can feeel your anger. It gives you focus, makes you stronga! Yep, that’s how it goes in the SW Universe. It’s rare to find a SW strategy game, but this Empire At War lives up to the expectations. You get to play as Empire or the Rebellion. There is a map of the galaxy in which you conquer planets and fight in space in a strategic manner.

There are also land battles, with heroes like Luke, Obi Wan, Yoda, as well as villains Vader and Emperor. Every one of them has special powers and abilities, just like the other troops you can employ to fight for you. Overall, it’s a very satisfying game.

Warcraft III is still played in massive multiplayer tournaments, and the game is not losing its appeal at all. In fact, as years go by, players return to this title time and time again.

There are many reasons. The uniquely designed factions, an impressive storyline, awesome gameplay and visuals that are still satisfactory. It’s arguably the best fantasy RTS ever. If you haven’t played Warcraft III yet, do yourself a favour and give it a try.

C&C is overall a good RTS franchise. But Generals is one that has stood the test of time more than its other titles. Its a strategy game set in modern time. The available factions are US, China and Middle Eastern “freedom fighters”. Upgradeable tanks, various buildings, defensive towers and underground tunnels are all part of the show.

Each faction also has an “ultimate weapon”. The US can complete shut down enemies systems with a cyber attack. China has a super powerful nuke. The Middle Easterners have poisonous biological missiles. All of them are extremely fun to play with, and they’re more or less well balanced.

There are many awesome RTS games to choose from, but most of these would be in any experienced gamers top 10 list. We hope you give a few of these a try and report back after leaving your room for the first time in months.