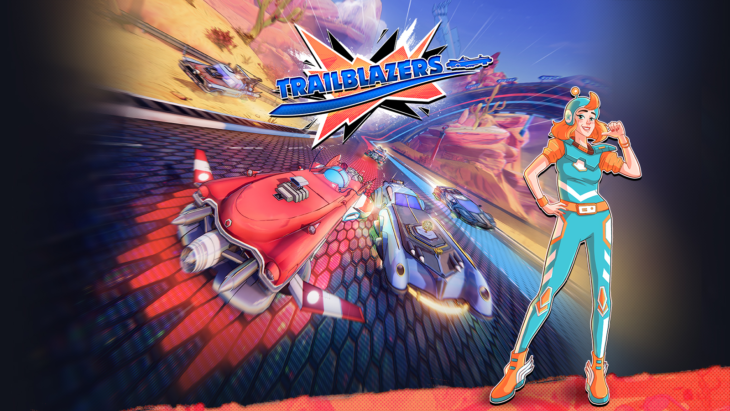 The adverse and rambunctious style of arcade racing found in Trailblazers is quirky and often a bit frustrating. While the overall strategic maneuvering of painting your own boosting strips all over a race course is definitely something new to the world of arcade racers, we’re not completely sold that these additions make it a sensible and rewarding experience for players looking for a fresh take on the fast-paced genre.

The Trailblazers experience takes racers into a vibrant and enthusiastic world filled with competitive racers of all species and forms. The idea behind the racing competition is to leave trails paint coordinating with your car’s color which act as boost strips, as well as simultaneously canceling out any competitors trails. Strategically placing boosting strips is definitely a unique jump on the arcade racing scene, but other aspects of the game tend to get in the way of an overall rewarding experience.

Throughout the career players will be thrust directly into an awkward “dramedy” between the best racers on the Trailblazers scene. Alien overlords, over zealous humans or sleazy lizards are a few of the racers that make up the story’s cast, pivoting the player from one to the next after a series of races with each one. The story is more of a sequence of text heavy filler that substitutes any viable method of problem solving for the paint smearing competition.

Bouncing from one character to the next, the player will witness a variety of narratives that pretty much sums up to be your traditional “good vs. evil” plot line allowing the player to take part of both sides. Around ten different circuit-style race courses players will battle their way through the competition by painting up the track with boost strips, pummeling enemy opponents and racking up an assortment of different points. Depending on the event, players will have an array of different objectives to complete typically only required to clear one to move on to the next race.

Each racer has their own set of stats like handling, speed and painting duration, but rarely can you prominently feel a difference. What is noticeable is the amount of oversteer on just about every racer’s vehicles that tends to take over fleeting race cars sending players ping-ponging back and forth between guard rails. Often the hovering racing machines feel as light as cardboard leading to some rather frustrating collisions and lengthy turnarounds almost instantly deeming a guaranteed last place finish.

Of course, players aren’t always in competition for a top place finishing position which can make for a much more accessible approach to the experience. Players will often spend their races acquiring various points which tally up in similar fashion as drift points in other racing titles. Spending more time in boost strips, pulling off epic race maneuvers like getting air off jumps, or even sending other racers into a tailspin using the paint power up ability are often the objectives found from race to race.

Though the racing largely centers around painting as much of the race track as possible and boosting your way to the finish, players may also find a light touch of combat added to the mix. As racers continue to move around the circuit the paint meter slowly fills up. Once full you’re then capable of unleashing a forward paint attack which can spin out any opponents stuck in the cross-hairs. While there’s not much else to the racing combat other than the simple paint attack, it does provide a sudden spark of chaos throughout the duration of the event.

Along with the single player career mode which allows players to take control of every character in the game, there’s also customized race options for multiplayer events. Both local and online matchmaking is available in Trailblazers adding in a nice break from the straightforward approach of the single player career mode. From a variety of different race events like time trials, standard races, or gateway races – which has players triggering a number of paint launching gateways located all over the course – there’s a subtle amount of depth to the otherwise narrow arcade racer.

Trailblazers brings a unique arcade racing experience to players with a creative twist to strategy on the racetrack. The methodical approach to painting your pathways from one lap to the next in hopes of finishing the race on one massive boosting strip definitely takes a bit of patience, but the extremely sensitive handling might be enough to throw players off before one masters the technique.

For fans of co-op friendly racers and quirky new experiences, Trailblazers acts as a short-fused catalyst to introduce some interesting tactics to racing. While the entire package of Trailblazers isn’t exactly brimming with content, anyone willing to shell out a fair bit of effort and time learning the ins and outs of the strategy should find themselves enjoying, at the very least, a handful of hours with the game.