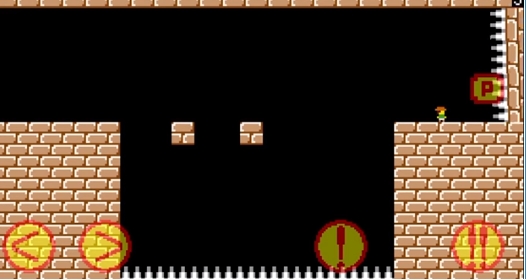 You may see a certain hard, retro-styled game making waves in social media these days. That game is called Trap Adventure 2. A game that is a Mario clone at its heart, but a devil in spirit.

Trap Adventure 2 prides itself on being an indie game that is difficult. Difficult as heck if gameplay footage videos are to be believed.

Relentlessly, unforgivingly difficult, Trap Adventure 2 takes the conventions of Mario and adds an extra layer of hell on top. The experience could best be described as controlled tedium.

Hiroyoshi Oshiba’s release has taken the Internet by storm. And people can’t figure out if it is because the game is actually fun or if it is because it has tapped into a zeitgeist long thought lost.

Veteran gamers pride themselves on the belief that classic games were tougher. But this may or may not be true – in fact, Trap Adventure 2 could be the hardest game of all time.

The game was released to little fanfare back in 2016. It now enjoys a viral life thanks to its cruel yet hilarious gameplay.

It doesn’t matter how successful the player is, somehow the stage will find a way to kill him.

The conventions of Mario get completely turned on their head. So much so you would not be remiss in thinking this game is a satire.

But it isn’t – it is quite earnest, at least according to its creator.

Some would see the game as being unplayable. Yet it is intended to be frustrating according to Oshiba. The game is literally designed to make players upset – and that’s ok.

In so many ways Trap Adventure 2 resurrects the long-gone feeling of challenge and frustration that often accompanied the best (and worst) 8-bit games.

The challenges of yesterday

Sometimes you would spend hours trying to overcome some obstacle only to come back later and say, “This game kinda sucks.”

But the difficulty compelled you to play and, without story or fancy innovations, you kept going forward. The reinvigoration of this spirit is what Trap Adventure 2 brings back to the fore.

It is a welcome addition to the current tenor dominating videogames.

Many analysts think 2018 is going to be a golden year for gaming, particularly indie games.

When indie games like Trap Adventure 2 show how they get it, gamers can’t help but wonder if the analysts have finally gotten it right.

With the rise of the Nintendo Switch as yet another viable option for indie gaming, there has never been a better time in history to get in on the crazy. Trap Adventure 2 shows that even the most insane, frustrating concepts have a place in today’s gaming environment.

Difficult for the sake of being difficult was never the goal of developers back in the day. The difficulty and insane challenge in old games often came out of a need to build in artificial levels of replayability. Now that developers can pursue the absurd for the sake of the absurd, or the difficult in the pursuit of a nostalgic challenge, videogames as a whole might benefit from the renewed innovation this brings.

Blair Marnell from the Nerdist writes: “Trap Adventure 2 may look like a Super Mario Bros. clone, but it uses that familiarity against the players…Every tactic that would have worked in Mario’s adventure becomes a death trap in this game, as the stage turns against the player at nearly every opportunity.”

The Kotaku comments section held such gems as: “Whoever designed this game thought of everything,” one reader wrote. “I don’t think it would be half as funny without that degree of prescience about player behavior.”

Hiroyoshi Oshiba remains humble in the face of his game’s success. He even comports himself with the kind of brutal honesty you would expect out of the game: “It’s terrible, so I won’t recommend it.”