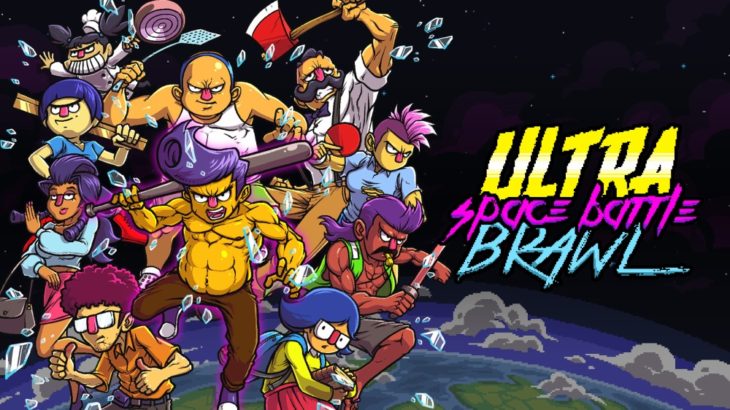 Pong has been a gaming icon virtually since the dawn of gaming, and in today’s modern era we occasionally still see games incorporate the energetic gameplay. In Ultra Space Battle Brawl players control one of the colorful characters that represents the galactic pong-like tournament, but soon realizes this is no ordinary match of casual back and forth pong gameplay.

With only two game modes – Story and Versus – players can easily jump right into a frenzied match of USBB. Each character has a unique back story as to why they’ve entered the battle arena, whether it’s attempting to gain fame to find their birth parents or showcasing that cats and humans can live peacefully together. The plotlines are rather laughable and typically don’t have anything to do with the event itself, but at least the game gives players something to follow throughout the tournament.

That being said, the gameplay itself presents fast-paced, chaotic action that has players volleying a ball back and forth trying to destroy their opponent’s goal. Guarded by a wall of bumper like icons, players must smash the ball and get the volley passed their opponent in order to chip away at the bumper shield. What seems like a pong game infused with fighting maneuvers, the matches will quickly heat up with a series of extremely quick-acting moves and swings.
To up the pace of the matches, players may also utilize the quick dash button which keeps the entire field of play on their toes. There’s a segmented health bar for the goal which represents how many shots each player must land in order to win the match. As each player dashes across the screen trying to maneuver the ball around their opponent, players also begin to fill their Ultra meter which allows the player to perform powerful tactics against their opponent.

Each of the characters has their own unique ultra move that can drastically turn the tides of the match. While most of these moves offer only a small range of increased advantage, some characters have a vastly improved method of strategy. Most notably, Donna’s vacuum void allows the best advantage as it allows the player to halt the speeding ball in place for a more precise shot at your opponent. This one tactic throws all of the others out of the window as slowing down the pace to your advantage seems more than unfair, especially when compared to the rest of the cast’s subtle ultra moves.

The game may be played one-on-one against the computer in story or mode, while the versus mode allows a bit deeper customizing options. Becoming the couch party game USBB intends to be, players can have up to 3 other friends join in for epic 2v2 matches that cross the line into borderline chaotic gameplay. It’s easy to lose the ball between the hectic smashing and swinging in each match, and following the pattern proves even more strenuous.

While the controls are extremely simple to understand, mastering this manic wave of quick-reflexed pong never quite feels as rewarding as you’d hope. In fact, more often do the landed strikes feel more acquainted to luck rather than sheer skill – at least for the average player. With every finished match and every defeat, USBB chips away at your patience with no real method to the madness.

To help mix up the classic pong approach to the standard matches, there are a few game changing level designs that even the playing field. Aside from the standard straightforward goal approach that stretch from the top to the bottom of the screen, there’s also goals shaped in circular rings or even the option to play with goals in all four corners. This increases your odds of accurately hitting an effective shot in the direction of your opponent’s goal, but also does the same for your rivals.

The Temples – A Metal Tribute Album to Ocarina of Time is Available Now, And It Will Melt Your Face

Fans of hectic and frenzied gameplay that aren’t looking to spend hours learning the formula and controls can find some enjoyment out of USBB. For a high-energy couch competition party game, USBB may not be the best option, but, I guess, is an option nonetheless.

While there’s not much to the galactic pong throwback in terms of variety, there is a chance for heart-racing action from time to time. More often than not, however, I found myself cursing the screen as my hopes of victory were dashed repeatedly due to the incredibly difficult to control pace of the game itself. Mastering the chaotic mess of Ultra Space Battle Brawl isn’t for the faint of heart and will most likely end in controller heaving, rage inducing forfeits.