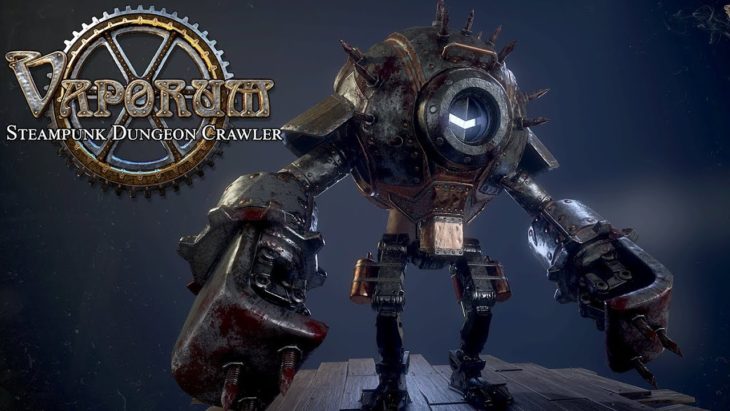 A Modern Experience With A Classic Design

Vaporum hearkens back to the classic dungeon crawling days with traditional grid-based movement and a plethora of environmental puzzles to help push your mental fortitude. What Vaporum brings to the genre is a gritty, dark atmosphere presented in a steampunk theme that guides players through an interesting narrative. But how well do all of these ingredients stack up within the finished product that is Vaporum?

Check out our video review of Vaporum below:

Players start off on the ground floor of a towering building known simply as, Vaporum. There’s a lot of mystery behind this chilling tower, and the feeling of abandonment is immediately apparent after your first few steps. The dark lighting and chilling sounds create goose pimples as you head aimlessly into the poorly lit and eerie tower, but thankfully there’s a few pick me ups and items to help you through your adventure.

The idea of Vaporum is that of the standard dungeon crawling experience. Players move in a grid-based motion which is a style that feels almost limiting in terms of how one can explore the game. Being locked into moving similar to a robot is an out-dated play style, but makes the classic PC inspiration all the apparent. Perhaps this play style may be a little off-putting to the younger, more modern audience; but for those who grew up in the early days of PC gaming will feel right at home.

The premise of Vaporum is to solve puzzles, defeat blood-curdling enemies and make your way through every floor within the tower. Of course, discovering the true nature of what happened within the tower of Vaporum is your protagonist’s primary goal, but staying alive within the death tower comes in at a quick second. Luckily, the game quickly throws a few helpful items at the player, including firearms and melee weapons, repair kits for your exoskeleton suit and plenty of other trinkets and consumables to keep your head up, no matter how dark and dangerous it gets.

Players are put in the middle of a vague plot when embarking into the depths of the tower, but begin figuring a few tidbits of information the further they dive in. After the first few minutes and handful of tutorial events, the protagonist makes their first major decision of the game – which exoskeleton suit to choose. Agile and quick, robust and powerful, or quiet and stealthy are some of the decisions players will have to make regarding which suit they choose. Different suits help cater to different play styles, but effectively they all provide players with substantial stat enhancements, sizeable inventory and more protection against the dangerous environment.

Once the decision is made players will then dive deeper into the brooding floors of the mysterious Vaporum. Each level of the tower invites new challenges and dangers, but never ceases to dip away from the overall atmosphere of isolation and heavy uneasiness. Every corner taken, unknown area explored or new level creates tension as the limited sight of the dark tower is brought to life by the many rickety sounds, footsteps and rigid backing score.

As players dive deeper they will begin to pick up a few combat moves and start filling up their inventory with useful items. Players need specific items like ammo and armor pieces to stay alive against the many mechanical enemies, but also important key items to solve Vaporum’s many puzzles. Throughout the game player will need to discover and collect a variety of keys which correspond with specific locked areas and other hidden passageways. However, some of the most basic items discovered can also play beneficial roles in clearing a path forward to the next floor.

Vaporum is largely a puzzle solving game, so each floor pits the player against tedious environmental puzzles, such as pushing a series of heavy blocks around to open a path or dodging fireball spewing hallways to reach certain areas. Finding keys for locked rooms, pulling levers to open doors and figuring out a specific pattern for stepping on weight reactive floor panels keep the game flowing in the direction of a complex madhouse of traps and horrors. Some items act appropriately in solving some of these puzzles, like using bricks or a single piece of ammo to toss or place items in certain areas. The world of Vaporum challenges the player to figure out its meandering obstacles – be it with brute force or mental finesse.

Luckily, the player is equipped with enough inventory space to keep yourself well armed and well stocked. The tower is filled with necessary items, so much so that it will be necessary in later areas to make the decision on what to keep and what to toss. It’s typically not much of a concern, as by that point you’ll have a better understanding of what becomes more important – and what you can get by without. Numerous armor sets, various melee weapons and firearms, ammo and power ups to keep your combat interesting and in your favor are among the top of the list to keep. However, different colored keys, interesting pieces of lore and miscellaneous items shouldn’t be ignored, as they can often shine some light on what to do next.

Plunging deeper into Vaporum players will inevitably run into some dangerous foes. The grid-based movement brings some getting used to when throwing punches and firing off rifles and pistols, but eventually you’ll sink into a rhythm of effectively dodging and counter-attacking enemies. Memorizing enemy movements and attacks can be taken advantage of, but eventually the game starts throwing rooms full of enemies and quicker moving enemies in your way.

However, the game does offer up some handy techniques to keep you evenly matched against the many enemies within. Exosuits are capable of powerful abilities learned from defeating specific enemies, such as sending electrical shock waves through surrounding floor areas, or unleashing poisonous gas to cover your foes. Each ability uses fusion power which can mostly be compared to other RPG’s stamina meter. It refills over time and requires a specific amount depending on each power. While these all help you make strides in combat against numerous foes at once, these abilities can also be used by the mechanical foes against you. It becomes important to known what type of enemy lays ahead of you in order to approach and strategize effectively.

One thing Vaporum adds to the overall gameplay to play in the favor of our tower dwelling hero is the ability to freeze time around you. While not as flexible as most other games with the time stopping feature, freezing objects around you can help players think about their next move. And while there’s no rewind button to undo previous mistakes, the pause feature helps players take their time to plan out every move. It’s also important to utilize the quick save feature, just in case you find yourself stuck on a puzzle or without a certain item to move you forward.

As you progress through the tower your player has the option of confronting a map for help. While the map is incomplete upon each new floor, exploring the tower uncovers the map for better reference on places you already explored; as well as areas you’ve yet to explore. You can make various adjustments and notes on the map to help guide you along smoothly, but ultimately it comes down to the player by paying close attention to their surroundings.

One last important feature in Vaporum is the leveling system. The more enemies you defeat within the tower means the more experience points earned. Like a traditional RPG, players will level up after so many points are earned which then allows the player to spend a circuit point on various abilities and skills equipped by the player. The skill tree is largely filled with the usual stats, such as overall health, weapon power whether its melee, firearms or dual wielding, and gadget usage – which utilize the above mentioned powers. Players can design different builds for their playthrough depending on which exoskeleton used, weapon types and powers equipped – and all of that can help which attributes to muster up for every level gained.

Vaporum takes players through a hair-raising experience and demands your attention to detail in a gripping first-person dungeon crawler. While most surprises won’t leave you trembling in fear, the constant feeling of isolation and uneasiness seems to lurk around every corner within the abandoned tower. In an experience where both puzzles and enemy interactions should take hold of the player in demanding fashion, Vaporum finds itself somewhere in between a methodical time killer and a thrilling adventure.

Fans of the old-school PC dungeon crawlers should instantly fall for Vaporum’s intrepid design. The haunting tower is filled with tedious puzzles and nerve-racking enemies, but the standard grid-based movement is a lot to soak in if not familiar with the genre. The expansive inventory system, leveling mechanics and assortment of weapons will keep players continuing through the valiant experience, while the narrative is no slouch, either. There’s enough within Vaporum for a worthy playthrough, just don’t expect something that’s vastly different from the traditional dungeon crawling experience.

A review copy was provided by the publisher.