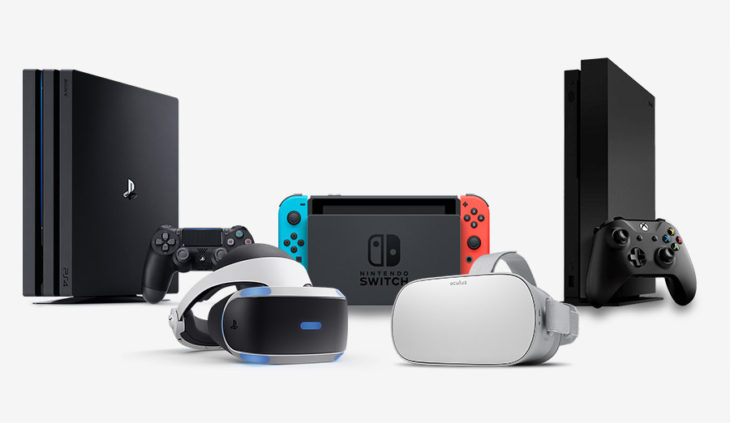 There’s a lot to consider when diving into the expensive world of video games and dropping a couple hundred on the newest generation of consoles/PC. The gaming space offers a tantalizing selection of games, systems and everything in between to keep us heavily dosed with feverish excitement annually. Though, what are the actual selling points that cause us to dive in one direction over the other?

There’s many methods of thought when it comes to determining which console manufacturer(s) to jump on board with. Some offer unique experiences exclusives to that particular system while others give players a broad spectrum of titles to play with the ease of one system. Then there are the technical powerhouses that deliver next-level visuals and audio for the gamer looking for maximum immersion. All of these traits play their own part in swaying a buyer one way or the next, but what’s most important?

I guess the answer to that question would require the knowledge as to what the specific consumer was in the market for. After all, with all of these selections to choose from comes a rather expansive audience crowding this particular entertainment medium. But, after careful consideration one system in every video game generation finds itself with a much larger gap between themselves and their competitors. And there’s plenty of factors that all lead up to the final nail in the coffin.

How Much Does It Cost?

Probably the most decisive factor for the majority of consumers is the total cost of the system. There’s a sweet spot manufacturers and publisher need to hit that’s both beneficial to the company, yet, still offers the average consumer a fair asking price. However, depending on the specs, this magic number can be difficult to hit. Too high, and potential buyers will flock to the opponent with the cheaper option. Too low, and the manufacturers aren’t making anything substantial to cover the cost of production.

Affordability is huge for many of us and console makers know this. We’ve seen failings happen simply because of a high price tag, with the most recent console being the Playstation 3. At a costly total of $500-$600, the average gaming consumer just isn’t going to shed this much money towards video games. Unless, of course, we’re talking about a high-end PC, which by that point you should expect to spend that much or more for quality hardware.

What’s In The Package?

Specs, specs, specs. It’s what much of the gaming world revolves around. Constantly evolving technology allows each generation to make a leap towards even sharper, crisper visuals that take the medium one step further with every release. But, is that the biggest selling point for gamers? While the PS4 and Xbox One have seen impressive sales as the two powerful gaming consoles on the market, Nintendo has consistently proven realism in graphics isn’t always needed to sell well.

What Nintendo has lacked in superior performance they’ve more than made up for in innovation and ingenuity. Whether it’s mobile/home hybrid gaming, motion controls or creating peripherals out of cardboard — Nintendo has given plenty back when scaling down the visual fidelity.

And Nintendo’s not the only major console manufacturer pushing out inventive new ideas. Playstation and PC gaming have introduced gamers to the immersive revolution that is virtual reality over the last couple of years, and it’s becoming a rather large niche community. More consumers are looking for every bang they can get with their buck. And if one gaming system has more options and features available, why wouldn’t you swing towards that purchase?

What Games Can You Play On It?

It’s the primary reasoning behind these console/gaming system purchases. The games are the focal point in any quality gaming product, and with it comes exclusive titles that best represent that particular company. Nintendo has Mario and The Legend of Zelda; Sega had Sonic; Sony had Crash and Spyro in the early years, and Nathan Drake and Kratos in the modern era; Microsoft has Halo and Gears of War. Each company owns their own first party developing studios, and with those studios comes what we call “system sellers”.

More often than not, there will be a modest selection of third-party titles that release across multiple platforms. But with exclusive titles console manufacturers can create an identity for themselves to help attract one specific audience over another. Sony has demonstrated its relentless ability to release gripping single player titles from nearly every genre. Microsoft puts its efforts into creating a game space for multiplayer focused exclusives, such as Sea of Thieves and State of Decay. And, of course, there’s Nintendo with the quirky, more family oriented gaming with a plethora of Super Mario titles, and there most recent, previously mentioned innovation — Labo.

These companies provide a certain experience for its consumers. And while the massive selection of multi platform titles helps decide between which console to buy a bit less stressful, the exclusive line-up can act as a double edge sword for the player. Game A looks incredibly fun, but only comes on system A, but system A doesn’t play game B, etc. However, this is exactly how the business end of the industry goes, pushing more consumers to climb into the role of a multiple system owner. It’s no question some of the best titles in history are exclusive to one publisher or another, but it can become a bit daunting when so many stellar titles exist in the dedicated world of exclusivity.

So what exactly pushes one system over the other? Well, a firm combination of all three of these features would be a great start. Unfortunately, not every manufacturer is capable of realistically knocking each one of these characteristics off the list. At that point, it’ll likely fall on what each specific consumer is looking for. There’s something out there for everyone; sometimes it just takes a bit of digging.