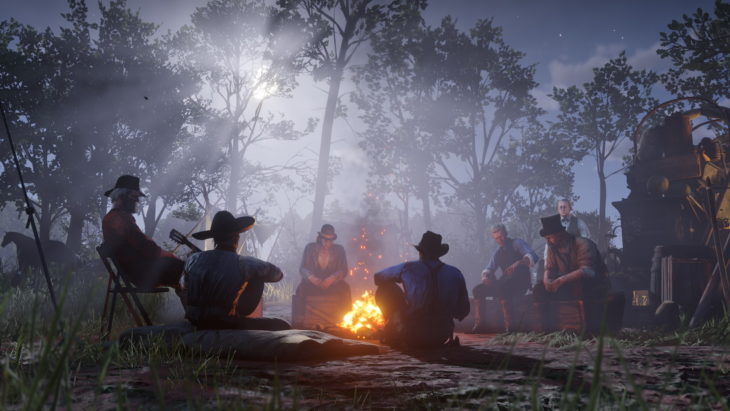 A Few Changes From The GTA V Formula

Rockstar Games has a track record of creating some of the most expansive and memorable games to date. Through the highly recognized GTA (Grand Theft Auto) series, to expanding into other genres like Midnight Club and L.A. Noire – Rockstar knows how to create an engaging world for players to excitedly discover. And with their upcoming return to the wild west of Red Dead Redemption 2, we’re eager to see what changes – and similarities – will be making an appearance in both the single player and multiplayer aspect of the massively hyped title.

With Grand Theft Auto V players were treated to a long and expansive experience dating all the way back to 2013. What started on the previous generation of gaming hardware, Rockstar took the booming series to the current gen with a few exciting changes, like the all-new first person mode, and kept one of the greatest games of the past decade alive and well. With that being said, have the veteran developers learned anything substantial from the mistakes that eventually played out in GTA V – and will Red Dead Redemptions 2 benefit from these so-called mistakes accordingly?

Give Single Players More To Experience

By far one of the biggest complaints from the gaming community regarding GTA V and its single player campaign is the lack of extra DLC and add-on content. While online players were gifted new and exciting extras and heists to keep the rewards coming well-after the initial release, single players were merely left with the same content now for 5 years. While most AAA developers like to bring in more content throughout the course of a lifespan for one of their franchises, Rockstar virtually ignored the single player aspect to solely rely on the real bread winner – GTA Online.

This is something we’d love to see change with Red Dead Redemption 2. With hardly any gameplay shown off and the game set to release in just over 2 months, we’re still not entirely sure what to expect in terms of a single player experience; but that doesn’t mean we aren’t hoping for post-release support. While the main campaign will no doubt take players through many different twists and turns along the way, there’s so much more that can be added to the experience with downloadable content and expansion passes. Especially later down the line to help present players with more incentive to jump back into the wild west era of gunfights and galloping horses.

Switching to the online multiplayer aspect of the game, GTA Online to this day houses millions of online players over 5 years after release. While the sprawling online world can be overly exciting and provide players with tons of various events and activities, there are also plenty of downfalls that come into play time and time again.

Aggressive “griefers” riddle the lobbies with destructive explosions, rampaging traffic and relentless assaults spawn after spawn. There’s no real solution to ridding otherwise peaceful lobbies of these commanding trouble makers or nuisances, but we would like to see some sort of move that allows a bit of separation from the different styles of players. Maybe something similar to Gran Turismo Sport‘s online ranking system which tags more courteous players with a higher letter grade, and the belligerent crash course drivers with a lower grade. The overall grade separates these players so they’ll ultimately be playing with their own kind, so to speak.

Adopting this method further into the world of online multiplayer games could be substantial in allowing certain players to enjoy themselves more in an open environment. Perhaps allowing the game to keep track of player kills and aggressive maneuvers could help separate the overly ambitious gunslingers from the peaceful horse-backing cowboys. It’s just a thought, but creating an online experience where most everyone can enjoy themselves without the hindrance of mindless interference would benefit the multiplayer in Red Dead Redemption 2.

One last addition to Red Dead Redemption 2 we’d like to see change from the GTA V format is toning down on the grinding. GTA Online had a litany of awesome vehicles and weapons to enhance your gameplay, but almost everything that was worth buying cost an absurd amount of in-game currency. Grinding heist missions got old fast, and completing the same events over and over grew tiresome and tedious. And in the end, was all of that time even worth the 1.5 million dollar tank purchase?

While the missions and heists were all extremely thrilling and entertaining – especially when playing co-op with friends – there was always a sense of “that’s all” when earning your reward. The amount of times needed to complete these events and activities in order to afford new and exotic vehicles/weapons barely gave players enough time to enjoy themselves with the fruits of their labor. Allowing Red Dead Redemption 2 players to complete a handful to a dozen missions (as opposed to dozens or even hundreds) and have the option to purchase something worthwhile would be a huge step forward in replayability and enjoyment. Unfortunately, spending extra cash on microtransactions will more than likely become a backbone of the multiplayer spending, much like it was in GTA Online, but we’re hoping Rockstar will allow more viable options for those not eager to shell out more cash than needed.

Red Dead Redemption 2 is set to release on October 26th, 2018 and is shaping up to be one thrilling game-changer for the anticipating industry. Coming to the PS4, Xbox One and PC, regardless of any of these changes, we’re still overly excited to get our hands on this return to the wild western world and make a name for everyone in the Van der Linde gang.