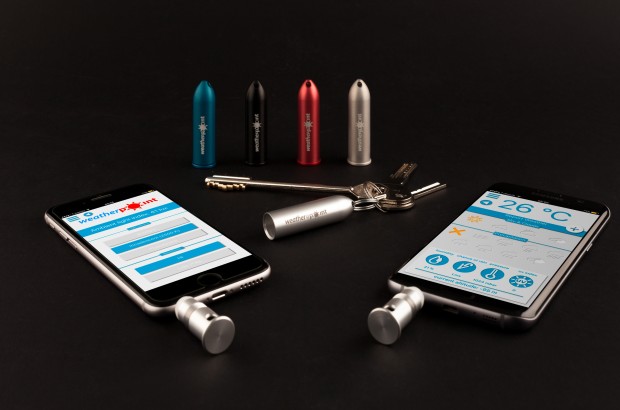 Company MindLab Solution is a relatively new start-up and the company is creating the worlds smallest weather station. This device can attach to a keychain and plugs into a smartphones headphone port where it tells the user a host of useful information. This tiny device also comes with it’s own case to keep it safe because it doesn’t come that cheap.

The device will be retailing between $60 and $90 when it goes into production later this year. While this device is very small, it does quite a bit which makes the cost easier to understand.

The device is called WeatherAtPoint and measures quite a bit more than just the temperature. It reads: humidity, UV levels and atmospheric pressure. These three cannot be done by regular smartphones.

People who spend a large amount of time outdoors will find this device to be particularly useful. Especially for activities where exposure to the sun is a concern. Hikers will also be able to measure atmospheric pressure to ensure they’re in a safe zone while hiking up mountains.

While this device sounds great, this isn’t the first time that MindLab Solution have attempted this device. The original project launched in 2015 but the original design had quite a few problems. The major issue being the fact that the device didn’t connect to all phones. The team started an IndieGoGo campaign last year for the second version of their product.

WeatherAtPoint is expected to start shipped to some backers in May and October. The team behind the device are yet to announce a public release date for this new product. They do note however that it will not work with the iPhone 7 due to the lack of a headphone jack on the phone.

We will provide you with updates as we learn more about this unique device and its production.